From obscurity to superstar status, Coutinho’s rise is complete 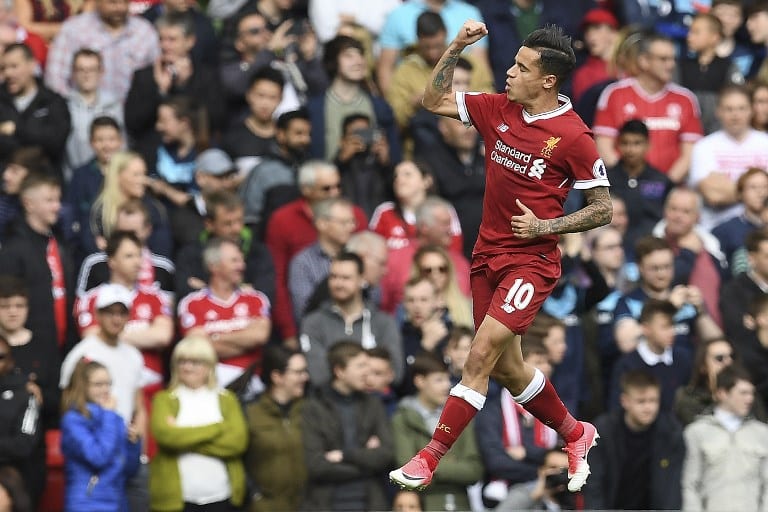 When Philippe Coutinho joined Liverpool in 2013, the Brazil forward was so lightly regarded that his signing was overshadowed by the arrival of Daniel Sturridge at Anfield earlier that month.

But five years later, Coutinho has become such a formidable force that his departure is being mourned by Liverpool fans around the world after Barcelona signed the Reds star on Saturday in a blockbuster transfer worth a reported £142 million ($192 million, 160 million euros).

Coutinho was just 20 and yet to fully harness his talents when Liverpool paid £8.5 million to bring him to the Premier League from Inter Milan, so perhaps it was not surprising that beating Southampton to his signature could not take the spotlight away from the capture of the highly-rated Sturridge from Chelsea.

It did not take long for Coutinho to seize the stage however and, while Sturridge’s injury-ravaged career is in danger of becoming an afterthought, the Brazilian is now one of the game’s most coveted players.

Coutinho’s against-the-odds rise is a tribute to a tenacious personality inherited from his close-knit working-class family back home in the tough Rocha district of Rio de Janeiro.

Now married to childhood sweetheart Aine, Coutinho once said: “My family is the foundation of everything in my life.”

He has needed that secure background to survive the slings and arrows of a career that might be glittering now, but for several years was full of potential pitfalls.

Having honed his natural gifts while playing futsal, the smaller indoor version of the sport, with brothers Cristiano and Leandro, the diminutive Coutinho was offered a trial by Vasco da Gama.

But Coutinho was so shy he clung to his father while the other youngsters warmed up.

“After a short while and some motivation, I was fine. When I actually started to play, it was all normal and natural. I wasn’t shy anymore, I was enjoying it,” he recalled.

The road was to get rougher for Coutinho, who was snubbed by Real Madrid when the Spanish giants passed up the chance to sign him from his Brazilian club for just £2.2 million in 2008.

Commitment to his craft

Instead, at age 16 he moved to Inter, where then manager Rafael Benitez hailed him as “the future of Inter”.

That bold prediction was quickly forgotten as Coutinho found it difficult to adjust to life in Italy, with loan spells at Vasco and Espanyol providing more first-team opportunities but little to suggest his future stardom.

Fortunately for Coutinho, Brendan Rodgers, then in charge at Liverpool, had spotted his potential when he helped Brazil win the Under-20 World Cup.

Coutinho accepted the challenge of moving to England, where the frenetic and physical pace of play can sometimes overwhelm foreign imports.

He hit the ground running and scored his first goal for Liverpool on his full debut in a 5–0 victory over Swansea in February 2013.

It helped that Coutinho is teetotal and a devout Christian with no time for the nightclub antics that have derailed the careers of so many of his peers.

That commitment to his craft fuelled Coutinho’s ascent and he quickly became an integral part of the Liverpool side that narrowly failed to end the club’s long wait to win the title in the 2013-14 season.

Once Liverpool’s star striker Luis Suarez was sold to Barcelona in 2014, it was Coutinho who assumed the mantle of the team’s driving force.

With 41 goals and countless assists in 152 league appearances for Liverpool, Coutinho was just as valuable to current boss Jurgen Klopp once he succeeded Rodgers.

But silverware has been elusive at Anfield and a yearning for success on the grandest stage made it inevitable that he would hand in a transfer request when Barcelona offered over £100 million to sign him in August last year.

Liverpool rejected Barca’s approaches then, but there was no such declaration of intent this time as the Reds finally bowed to Coutinho’s wishes on Saturday.