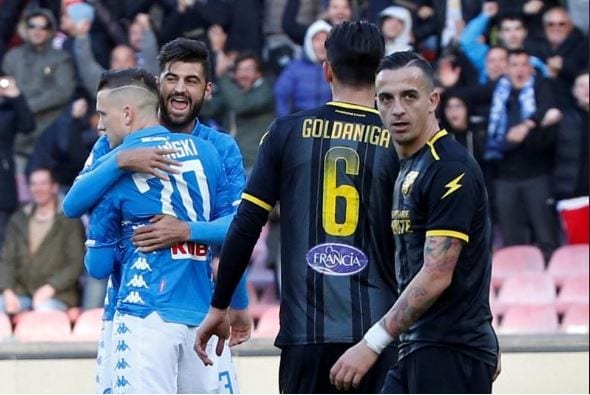 The president of Serie A strugglers Frosinone hit back at Napoli owner Aurelio De Laurentiis on Tuesday over a suggestion that teams should be fined for finishing bottom of the table.

De Laurentiis singled out Frosinone for criticism in an interview with the New York Times, saying it was wrong they should be promoted, spend one season in Serie A, take a slice of the television revenue and be immediately relegated.

“If they cannot compete, if they finish last, they should have to pay a fine. They shouldn’t be given money for failing,” he said.

But Maurizio Stirpe said that Frosinone were victims of an unfair system and suggested that De Laurentiis should follow his example by sorting out Napoli’s stadium problems.

“De Laurentiis’s joke is unpleasant and rude,” he told Naples-based Radio Marte. “He also forgot where he started: 10 years ago he was fighting against Frosinone.”

“Television rights are badly distributed in Italy,” he added. “In England, the resources are distributed more evenly, so much so that a team like Leicester (City) can win the championship.

“In Italy, it is not possible, there is a team that wins for seven years (in a row),” he said, referring to Juventus.

Stirpe added that De Laurentiis was one of the architects of the system. “There is a team that takes 160 million euros ($182 million) from TV and Frosinone takes 28 million,” he added.

Frosinone made their Serie A debut in 2015-16 and were immediately relegated.

Last season, they were promoted back to the top flight but have again found Serie A tough going and are 19th in the 20-team table with 10 points from 20 games.

In the last two years, the club have renovated the previously abandoned Benito Stirpe stadium — named after Stirpe’s father — and have been given a 90-year lease by the municipality.

Napoli, on the other hand, have been embroiled in a row with their local authorities over the state of the municipally-owned San Paolo stadium.

“I built a stadium with my modest resources, he could do the same in Naples because the San Paolo is outdated,” said Stirpe.