George Blackberry: From grace, to grass, to grace again 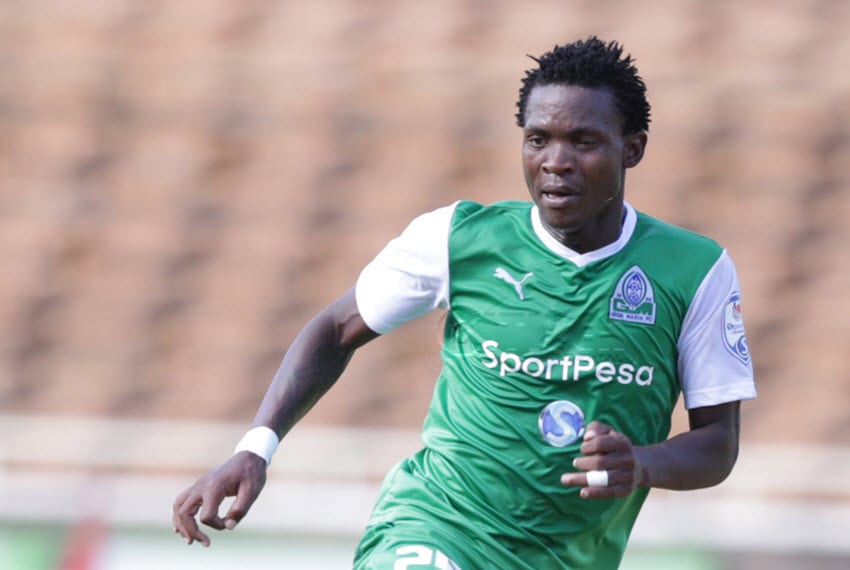 Gor Mahia attacking winger, George ‘Blackberry’ Odhiambo is slowing enjoying a career revival with flashes of form that made him a terrace favourite at the peak of his powers during the 2010 season.

Back then, the Kenyan Premier League (KPL) titleholders did not lift the crown but his performances were one of the main catalysts of the team’s renaissance that has seen them win the trophy three seasons in a row.

At his thrilling best, Odhiambo was a nightmare for defences, top scoring for K’Ogalo and being named the Player of the Season besides earning a call up to national team Harambee Stars.

He was also the first KPL player to receive endorsement from a local company when Ticket Masters contracted him to be the face of the firm but he never came round to execute the deal.

The world was at his feet, fans had composed songs on the stands in his praise and veteran writer and retired Standard sports boss, Omulo Okoth once compared to the legendary goal winger, Abbey Nasoor, “who had a knack to dance around and beating opposing defenders at will.”

But it then went all south and after scoring four goals in the current campaign, Citizen Digital caught up with the player who was nicknamed after the most extravagant mobile phone of that time in tribute to his swashbuckling style.

The player who followed up being crowned the Most Promising Player of the Year in 2009 when he joined Gor fresh from Thur Gem High School with the top domestic prize in 2010 could initially not hold down a starting place as the team raced to back-to-back titles.

However, towards the end of their ‘Invincibles’ campaign last season, Blackberry’s ‘network’ bar started getting full as a late rally saw K’Ogalo safely navigate the campaign without defeat.

The rich form has spilled over to this season and with his contract with the 15-time champions ending in June, his performances so far could earn him a deserved extension.

In the absence of last season’s goal machines Meddie Kagere and Michael Olunga who left the club in the pre-season, Blackberry has been instrumental to their rise from a dismal start to third.

Looking back at his four years in the deep hole, the player blames his former agent and television pundit, Arnold Kanyag’onda for almost ending his career.

Kanyag’onda was behind his move to Randers and Odhiambo laments he botched his move thereby robbing him of the confidence that stalled his football.

“Randers was a career breakthrough for me. I played in friendlies and the coach was very impressed with me. Kanyag’onda, my agent then, was given responsibility to market the club’s merchandise in Kenya.

“One jersey was supposed to cost Ksh7,000. There were billboards too and returns were supposed to be remitted to the club, but he never did,” the player now claims.

“The club’s management was so upset with Kanyag’onda and I was sacrificed for it,” the emotional attacker recounted.

“I pleaded with the club to cut the money they were demanding from him from my salary in a bid to save my contract, but they declined. I contacted him but wouldn’t respond, as the deal turned to the worst.

“The consequences were warming the bench all through, which I could not stand anymore. I had to move on,” Odhiambo, who has never spoken to his former agent since his return, even though they meet during games where he is commentating for broadcast partners, SuperSport decried.

“That one you have to ask him. It was by mutual consent and by the time he was terminating it he was working with someone else,” Kanyag’onda responded to the charges when contacted by Citizen Digital.

“That can’t be the reason. Look, how many games did he play for the club? If there was such an issue, the club would have told me. They were very good at communicating.

“If that was the reason and he was really doing well then, another club would have taken him up immediately. He would not have come back all the way to Tanzania. Randers said he had indiscipline issues, why would they lie? If club have a problem with an agent they will just ask his player to look for another one,” the television pundit and sports marketer added.

“From there he went to Azam, and what did Azam guys say? That they wanted serious players; they didn’t want players who were skipping practice two-three times a week,” he narrated further.

On his unceremonious exit from Azam in July 2012 Odhiambo laid it out on hostility.

“I was given a car and a big house by the Azam management one I landed there. Some players and officials complained that I was accorded special treatment. It reached point hostility was unbearable.

“I told Shikanda (Ibrahim) who was an assistant coach there I would rather go instead of fighting unending battles. In Tanzania anything can happen to you.”

Blackberry sought refuge at Nairobi’s Kawangware based City Stars after six months in cold in January 2013.

A month later he joined Armenian side FC Shirak, where he would still not get his form back forcing his quiet return to K’Ogalo in January 2014.

“I thank the club’s chairman Ambrose Rachier for his confidence in me. I told them to be patient with me for I knew it would take time before I regain my form.

“I shared with Frank Nuttall my story and was patient with me too, he even accepted my request to play as a striker instead the midfield role,” the player who barely got a look in under Nutall’s predecessor, Bobby Williamson underscored.

It was the Scotsman who quit the club after four matches of this season that brought him back to the club’s first team, playing him in cup competitions and during the tail end of the campaign, in the league where he scored three crucial goals.

“I now feel good and confident. I cannot fear the return of Kagere; I am in a good shape to fight for a first team position,” Blackberry said of the impending return of the former Rwanda international in June.

“Ze Maria is one of the intelligent coaches I have ever worked with. He listens to players in making decisions. We have shared a lot and he has helped me,” the attacker who can play central and on the wing said of his current boss.

Asha Abibi Orieny who first spotted Blackberry as a pupil doing his kick-about in his native home in Siaya County can blossom to full potential if accorded support and patience.

“He was a notable talent at a very tender age, I saw him in class six at Mfangano Island, following him up to date.

“The difficult task was to overcome the low moments when his stints abroad backfired; with regular play and focus we can see the Odhiambo of 2010 again,” the D.O Makasembo Secondary School Principal asserted.