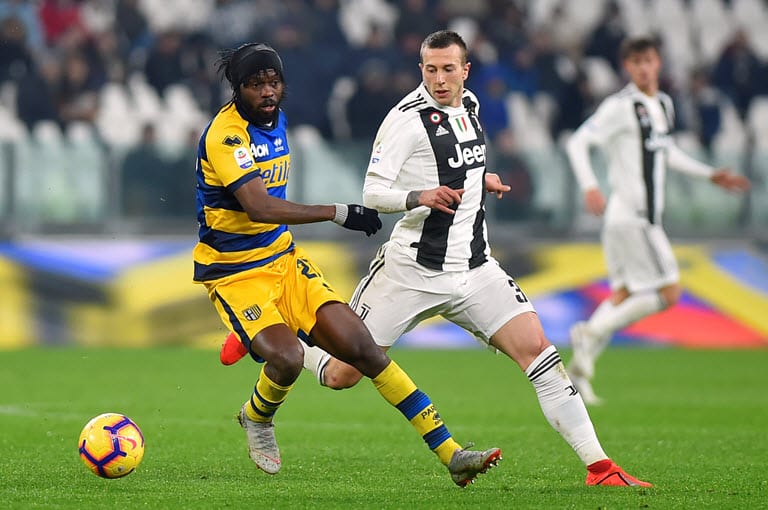 Parma forward Gervinho scored twice as his team hit back from 3-1 behind on Saturday to draw 3-3 at Serie A leaders Juventus who dropped points for only the third time in the league this season.

Cristiano Ronaldo also scored twice, making him Serie A’s leading scorer with 17 goals, to put Juve in command but a brilliant flicked goal by Gervinho followed by a stoppage-time equaliser meant the Turin side’s lead over Napoli was cut to nine points.

Juventus, chasing an eighth successive Serie A title and still unbeaten, have 60 points from 22 games while Napoli have 51 after their 3-0 win over Sampdoria earlier on Saturday.

Juventus coach Massimiliano Allegri was furious about the equaliser when his team lost the ball trying to play their way out of defence.

“The third goal was incredible, we had the ball by the corner flag… and then we played it into the penalty area. You can’t do that in the 95th minute,” he said. “There’s no shame in just kicking the ball into the stands.”

Juve went ahead in the 36th minute when Ronaldo collected Blaise Matuidi’s pass in the penalty area and, although slipping, managed to produce a shot which deflected off a defender and beat Luigi Sepe.

Juventus were awarded a penalty for a foul on Martin Caceres at the end of the first half but the referee revoked it after a reviewing it on the pitchside monitor.

Daniele Rugani put Juventus 2-0 ahead in the 62nd minute after a series of ricochets, Antonino Barilla headed one back two minutes later and Ronaldo restored Juve’s two-goal lead with a towering header in the 66th minute.

Former Arsenal and Roma forward Gervinho reduced the arrears again by turning in Juraj Kucka’s low cross with a clever back-heeled flick at the near post in the 74th minute.

Deep into stoppage time, Juventus failed to clear the ball and Roberto Inglese forced his way to the goal-line and pulled the ball back for Gervinho, who scored with a shot which Mattia Perin got his hand to but could not stop.

“It wasn’t easy to get back into the game from two goals behind,” said Parma coach Roberto D’Aversa, whose side are 12th with 29 points. “But the lads did really well and got their reward.”