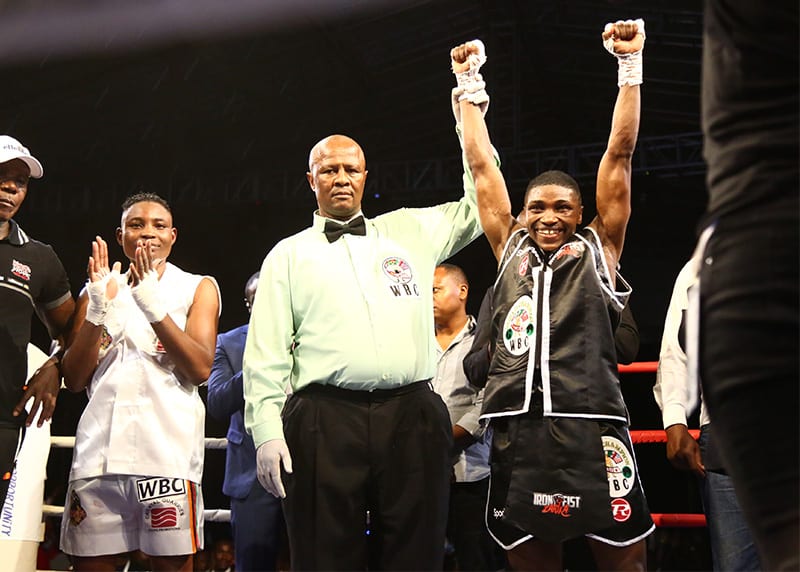 Phiri, 32, engaged the Kenyan in a marathon 10 round fight bedecked by wit, tact and blows amidst a rancorous response from the largely partisan crowd who urged Zarika on every time she scored points either through an upper cut or lower blow.

At the end of it all, she prevailed on a unanimous decision as all the three judges — Michael Neequaye, Fillemon Mweya and Irene Semakula — gave her the win on 98-92 99-91 97-93 points respectively sparking off wild cheers from the crowd.

Earlier on Kenya`s male boxer Rayton Okwiri stopped Tanzanian journeyman Pascal Bruno in the third round of the middleweight under-card bout in technical knockout and the referee had to stop the proceedings to save the visitor from further punishment.

The Saturday night fight was dubbed a “revenge mission” by the visiting Phiri who lost to Zarika two years ago at the Carnivore but Zarika, who prior to this fight had pitched camp in the UK for specialised training was not about to let the title fizzle out of her hands, not before  adoring home fans!

From the onset the fight was expected to be fierce and the two boxers lived up to the expectations of the night getting off the blocks swiftly charging at each other with fury.

Phiri proved her mettle and perhaps the hostile away ground may have worked against her. In round two she appeared in charge as she fired jabs at Zarika who was however cautious through this phase.

Zarika, 34, turned on the style in round three with ferocious upper cuts which Phiri could do little to prevent. Round four gave little to talk about but the girls exploded in the ring in round five; Phiri more determined than ever moving swiftly on the canvas as she calculated on how to tame the opponent before her but Zarika, not keen to let down her fans gave back in equal measure; pound for pound.

At the end of it all,  joy it was for Zarika, former WIBF Middleweight title holder Conjestina Achieng, also in attendance joining her on the ring for the final rites together with Ronald Karauri and Nairobi Woman Representative Esther Passaris.