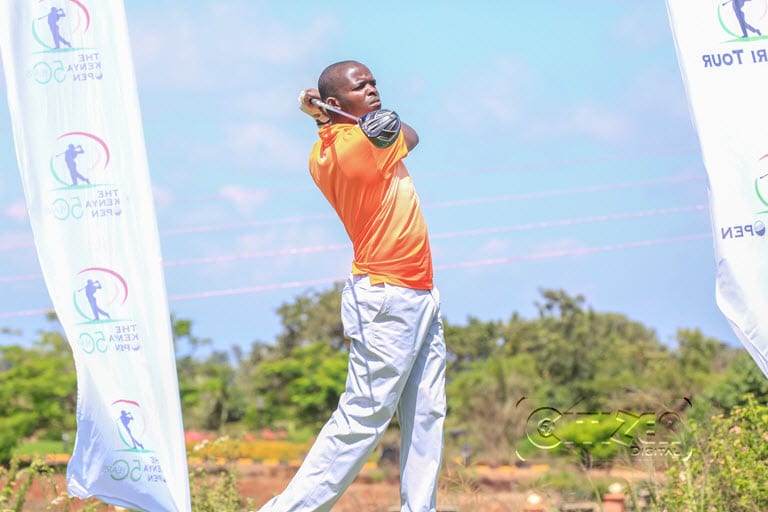 Golf Park’s Tony Omuli kept his rich vein of form going at the fourth leg of the Safari Tour Golf series at the Thika Greens Golf Resort. Omuli returned a score of one under par-71, the best for the second round, to take his total tally to four under par 140.

The overnight leader teed off in good form, not dropping a single shot on the first nine, finishing off with a birdie on the 9th, he would eventually drop his first shot at the 14th followed by another at the 16th, before saving his round with back to back birdies in the 17th and 18th, to return a score of one under par on the day, tied with Greg Snow and CJ Wangai.

Speaking after the Round, Omuli said he was pleased with his performance in the first two rounds, adding focus now shifts to the next two days in order to get the job done.

“Overall, it was a good round and I am pleased with the performance in the opening two rounds. My focus now shifts to the next two days to get the job done. The course is very competitive, this offers all of us an opportunity to improve on our game,” he said.

Dismas Indiza held on to second spot on the overall log after shooting a round of par-72, to take his total tally at the Thika Greens to two under, 142. The Mumias based hard hitter, started in great form, dropping his first shot of the day on the 6th hole, after posting par scores on the 1st, 3rd and 4th holes, with birdies on the 2nd and 5th holes. It would be his only dropped shot in the first nine, before two further dropped shots in the back nine saw him return a tally of par.

After a disappointing first round by his standards, series leader Greg Snow got back on track with that one under par score to place him third on the standings, tied with Sujan Shah, and Alfred Nandwa, three shots off the leader.

Ugandan Philip Kasozi, who is on his third Safari Tour outing, is currently tied for eighth, alongside the Professional Golfers of Kenya Captain CJ Wangai, at 2-over Par 146. Tanzanian Nuru Mollel is tied for 13th alongside Royal Nairobi Golf Club’s Kenneth Bollo, who emerged top Pro at last weekend’s PRO-AM at the Thika Greens Golf Resort at 4-over Par 148.

15 players missed The Cut, which was set at 8-over for the first two rounds, which means they will not proceed to the third and fourth rounds of the Thika Greens Golf Resort leg of the Safari Tour Golf Series. Those who missed The Cut included winner of the Nyali Golf and Country Club’s leg of the Safari Tour series, Golf Park’s David Wakhu, as well as amateurs Zubair Khan from Muthaiga Golf Club – who made his Safari Tour debut at the Limuru leg of the series and made The Cut in the leg – and Akshay Chandaria from Windsor Golf and Country Club.

Action resumes tomorrow for Round Three of the Thika Greens leg of the Safari Tour Golf Series with the Muthaiga Golf Club duo of Ganeev Giddie and Jeff Kubwa first off the first tee 10:00am. The leading group comprising of Muthaiga Glof Club’s Greg Snow, Mumias Sugar’s Dismas Indiza and Golf Park’s Tony Omuli will be last off the tee at 11:10am.