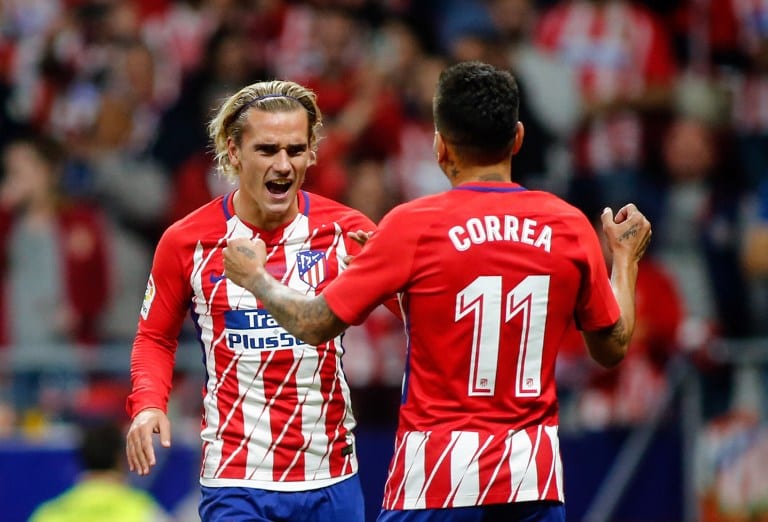 Antoine Griezmann ensured Malaga didn’t spoil Atletico Madrid’s moving in party at their new 68,000 Wanda Metropolitano stadium with the only goal in a 1-0 win on Saturday.

The French international, restored to the side after a two-game La Liga ban, swept home Angel Correa’s cross on the hour mark to move Atletico up to third in the table.

Atletico remain four points adrift of Barcelona, though, as Paulinho scored his first Barca goal six minutes from time to continue their 100 percent record in a 2-1 win at Getafe.

“I’m delighted to score the first goal in this magnificent stadium and hopefully it is the first of many,” Griezmann told Bein Sports Spain.

“For me it is the best stadium I have played in, and I don’t just say that because it is my club.”

Atletico boss Diego Simeone had called on fans to recreate the intimidating atmosphere of the Vicente Calderon by turning their new home into a “pressure cooker.”

The noise matched the pre-match pomp as Spain’s royal air force took part in a flyover, whilst the match ball was delivered by paragliders.

“As a player or a coach I have never seen anything like it,” said Simeone.

“The memory will live with me for the rest of my life. All the Atletico flags flying, the fans involvement, I wanted to go on and play!”

Spanish king Felipe VI, an Atletico fan, was also in attendance, but after all the pre-match fanfare, there wasn’t much for the crowd to get enthused about in the opening 45 minutes.

Correa had Atletico’s only two clear chances of the half as he blazed over and straight at Roberto Jimenez.

At the other end Jan Oblak was forced into a fine save from ex-Atletico striker Borja Baston as Malaga broke dangerously.

Atletico started the second period brighter as Roberto denied Koke and Saul Niguez before the deadlock was broken on the hour mark.

Correa burst clear down the right and his low cross was expertly guided inside the near post by Griezmann on his weaker right foot.

Malaga had one late chance to rain on Atletico’s parade two minutes from time, but Oblak was again up to the task to turn Diego Rolan’s fierce effort over the bar.

Barca were also made to struggle as they had to come from behind at Getafe to open up a seven-point lead over Real Madrid, who travel to Real Sociedad on Sunday.

However, Barca could be without record signing Ousmane Dembele for a number of weeks after the French winger hobbled off in the first half with a hamstring injury.

“Fortunately, it was an important test for us. We managed to turn the game around and that power of reaction the team had means a lot,” said Barca boss Ernesto Valverde.

Paulinho’s 40 million-euro signing from Guangzhou Evergrande was just one of a number of much-criticised moves by the Barca board following the departure of Neymar to Paris Saint-Germain.

But the Brazilian international showed his worth by smashing home Lionel Messi’s through ball to score the winner.

“I’m very happy to score the goal. It was the winner which was the most important thing,” Paulinho told Barca TV.

“It was a difficult game because Getafe have players with quality and we conceded the first goal but we were calm, had patience and went looking for the result.”

Barca had barely replaced Dembele with Gerard Deulofeu before they fell behind six minutes before half-time.

Valverde made another change at the start of the second period as Denis Suarez replaced Iniesta.

And it was the substitute who inspired Barca’s revival as he collected Roberto’s cut-back from the right wing before bending the ball high past Vicente Guaita into the top corner.

Paulinho completed the comeback when he burst onto Messi’s through ball and smashed across the despairing Guaita into the far corner.