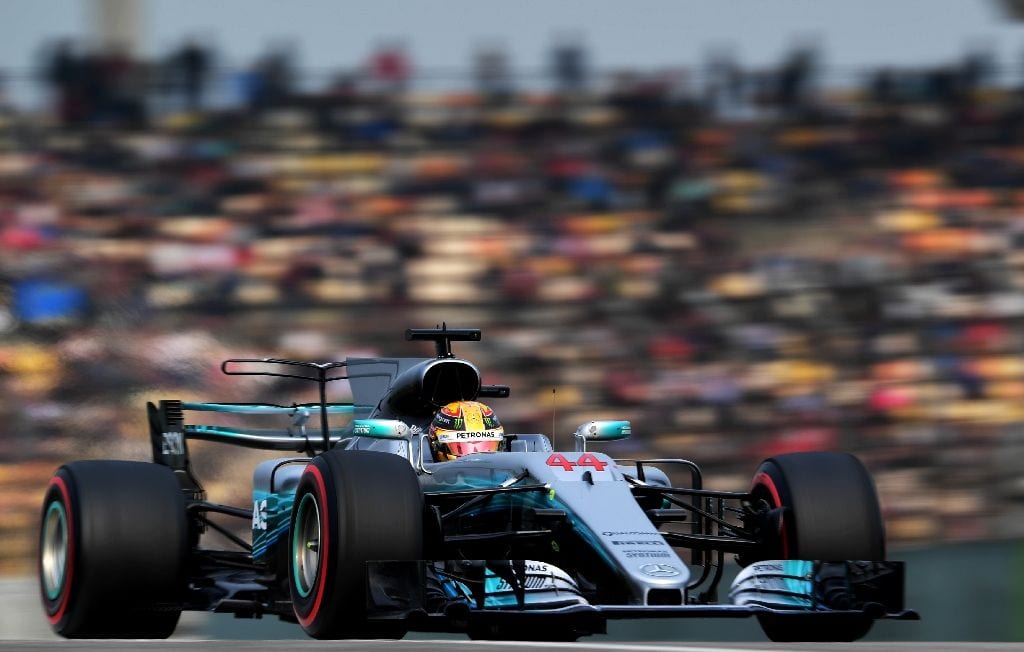 Lewis Hamilton roared to pole position in Saturday’s qualifying for the Chinese Grand Prix as Mercedes look to avenge a stunning defeat by Ferrari in the Formula One season opener.

The Briton, stung by Sebastian Vettel in Melbourne two weeks ago, pipped his German rival by two tenths of a second in Shanghai with Mercedes team-mate Valtteri Bottas and Ferrari’s Kimi Raikkonen filling row two for Sunday’s race.

Hamilton jumped onto the pit wall to soak up the adulation of the crowd after clocking the fastest lap of one minute, 31.678 seconds to give the former world champion his fourth Chinese pole in five years.

“We knew it was going to be close and we had to pull out all the stops,” said Hamilton, forced to play second fiddle to Vettel in the third practice session earlier in the day.

“The Ferraris have looked so fast but I managed to just chip away. It’s exciting for me because we really fight with these guys,” added Hamilton, who has won the Shanghai race on four previous occasions.

“That’s what racing is all about. It really pushes you to raise the bar each time you go out there.”

Vettel was left shaking his head in disbelief.

“I don’t believe that, it was the perfect lap,” said the four-time world champion, who looked unstoppable in Saturday’s practice run, continuing in the rich vein that saw him draw first blood in Australia.

“Maybe I chickened on the brakes slightly on the last lap. But I think we can still improve, so let’s see what the race looks like tomorrow. Conditions will be different.”

The signs point to another furious battle between Mercedes and Ferrari but with rain forecast for race day, Red Bull’s Daniel Ricciardo could fancy his chances after qualifying fifth.

Team-mate Max Verstappen gets an unwanted opportunity to test the theory that overtaking has become harder in the new wider Formula One cars after only qualifying in 19th.

But all eyes will be on the front two rows after an absorbing tussle which suggested Vettel’s Melbourne was no fluke and that Ferrari are ready to end the stranglehold Mercedes have exerted over the sport for the past three years.

“We will see tomorrow how important being on front row is,” shrugged Vettel, whose only victory in China came in heavy rain in 2009. “Our car is strong, no matter what.”

Ricciardo, whose home race ended prematurely, will start alongside Felipe Massa on the third row after the Brazilian clocked the sixth fastest time for Williams.

Behind them, Renault’s Nico Hulkenberg edged out Sergio Perez’s Force India for seventh with Daniil Kvyat’s Toro Rosso and Lance Stroll’s Williams rounding out the top 10 places on the grid.

Very much in the shop window for 2018, Fernando Alonso appeared pleased enough after steering his underperforming McLaren to 13th as the former world champion told his team radio: “I pushed like an animal!”

There was a hairy moment at the end of the first qualifying session when Antonio Giovinazzi smashed his Sauber into a wall on the pit straight, although the Italian walked away from the wreckage unhurt.