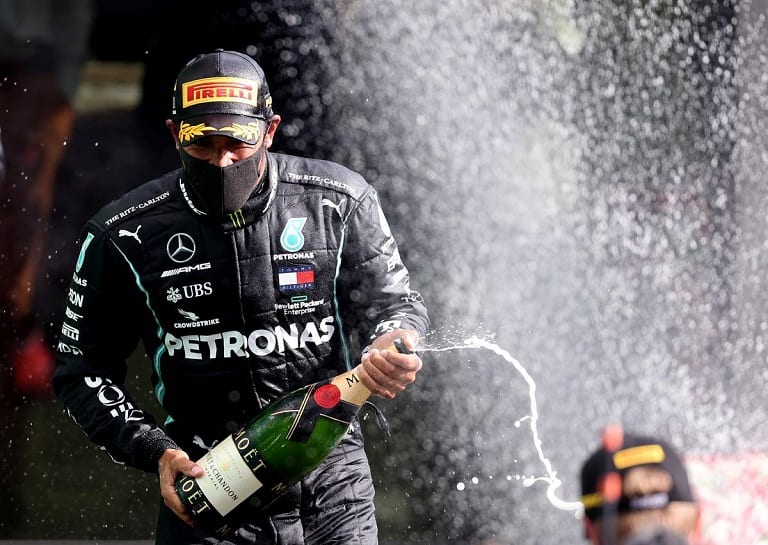 The 36-year-old left it until last winter to sign his current one-year deal with the world champions.

He said after winning Sunday’s Spanish Grand Prix: “We don’t want to rush anything but I think we have to be sensible and start conversations.

“They’re very complex, so hopefully soon we can start, as long as it doesn’t interfere with the actual job.”

The delay in his contract talks last year was not planned. He and team boss Toto Wolff wanted to wait until after Hamilton had clinched a record-equalling seventh title.

But when they scheduled talks over the final three races in the Middle East, Hamilton contracted coronavirus.

The season ended only two weeks before Christmas, and then Wolff himself caught Covid-19 in the new year.

Hamilton said the lateness of the talks had been difficult for both of them.

“We never want to be in the position that we were in in January, in February,” he said.

“It ruined my whole winter and I’m sure it wasn’t helpful for Toto’s, in terms of being out to be off and relaxed, so it felt like we didn’t really have much of a break.”

Hamilton’s win in Spain was his third in four races this year and gave him a 14-point championship lead over his main rival, Red Bull’s Max Verstappen.

Hamilton emphasised that he did not want talks to detract from his campaign for a record eighth championship.

“We still have 19 races to do,” he said, “but it would be great to get something in place before the break so then we could, again, be in that break and have a clear picture of the future.”

The season then has an intense second part, with 12 races scheduled to be crammed in between the last weekend in August and mid-December, although some are in doubt because of the pandemic.

A week ago at the Portuguese Grand Prix, Wolff also indicated he wanted to get on with sorting a new contract with Hamilton.

“We learned our lessons that we wouldn’t leave it to the Christmas holidays,” Wolff said. “We are in a very good place and our relationship is growing stronger every year and it’s about time to really give it a little nudge and start to speak and this is what we are going to do soon.”

Assuming Hamilton stays at Mercedes, Wolff has to choose between his current team-mate Valtteri Bottas and Williams driver George Russell for the second seat.

Russell is a strong candidate after outperforming Bottas when he stood in for Hamilton at the Sakhir Grand Prix last December, but it remains to be seen whether Wolff wants to risk upheaval given the harmonious relationship between Hamilton and Bottas.

Alpine’s Esteban Ocon is a long-time Mercedes protege and is also out of contract at the end of the year, but the Frenchman is considered an outside bet for the seat.