Malkia Strikers head coach Paul Bitok is optimistic their preparations towards the Tokyo Olympics will still be flawless despite cancellation of their high-level training camp in Brazil.

The team was set to travel to Brazil last month, where they were set to train for 45 days but the Ministry of Health denied them a travel permit owing to the overwhelming COVID-19 situation in the South American state.

Over the weekend, National Olympics Committee (NOC-K) sent the team to Mombasa for a workshop, and after the trip, Bitok says they have shrugged off the disappointment that came with the revoked Brazil camp.

“We had a very great moment in Mombasa. It was right time for us to go out after training for the last two months in a locked setting. We had worked so hard preparing for the Brazil but unfortunately we couldn’t make it, so it was necessary to relax before resuming training in Nairobi.

“We thank the Ministry of Sports because they also understood that we need to take care of the girls, they have been working hard in readiness for the Brazil camp. A morale boosting arrangement was therefore important because we were really down, but now we are fine,” said the veteran coach.

“The state of affairs in Brazil is not very good at the moment and we understand we can’t force it, as much as we needed it for the preparations.”

In Mombasa, the towering coach says it was not just a normal excursion as light but important sessions were organised for the team.

“We enjoyed ourselves but we didn’t want lose the days in Mombasa, so I had planned several trainings. We had weight lifting, fitness sessions and we also thank the NOC-K for bringing other programmes like branding, finance and investment and media relations,” he explained. 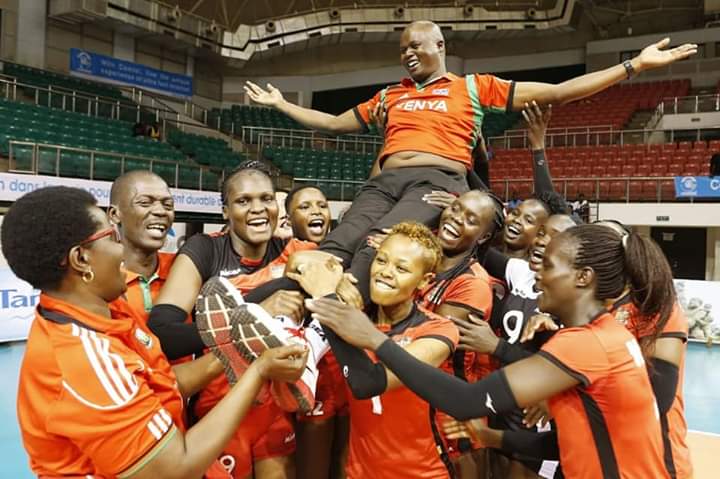 The team also toured the National Museum and had a light tournament of beach volleyball among themselves.

“We want to go to the Olympics this year and win matches. We are resuming official training straight away since we have high level coaches from Brazil, and we hope it will be a great opportunity to learn from them. If possible, the Ministry should organise for us one or two international friendlies. If we cannot travel, they can bring in some teams.

“It will be good for us since training with high level coaches without the friendly matches will not take us anywhere, you may think you are good but you have to test your ability with others and know their tactics,” elucidated the coach.

Bitok was set to name his squad after the Brazil trip but will now postpone it almost to the last minute.

“We still have time for that, about two and a half months before the Tokyo Games kick-off. It is a good chance for other players to continue training, most of the players are young. We want to give them an opportunity, because I don’t know by then the level they will be in. We are going to give an opportunity to everyone before we decide.”

The coach revealed he will rely heavily on the statistics his technical bench is keeping during training sessions to select his final squad, acknowledging the competition is getting tougher each day.

Malkia are now back to training at the Kasarani Indoor Arena as they look forward to the Olympic Games.

Volleyball games will kick off on the July 25, and Kenya has been pooled in the Group A alongside hosts Japan, South Korea, Serbia, Dominican Republic and Brazil.