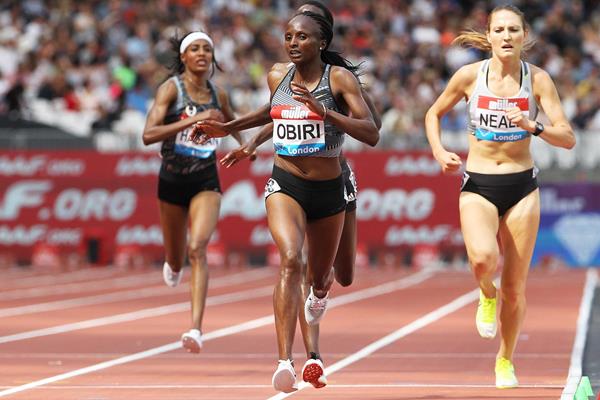 Impressive victories by Hellen Obiri and Shelly-Ann Fraser-Pryce highlighted the second day of action at the Muller Anniversary Games in London Stadium on Sunday.

In one of the premiere showdowns, Obiri kicked away from Sifan Hassan with just over 200 metres to go to take the 5000m in 14:20.36, a meeting record and world-leading performance. The reigning world champion needed to utilize every bit of her notorious closing speed to hold off compatriot Agnes Tirop, who blew by the fading Hassan over the final 50 metres to finish second in 14:20.68. For Obiri, it was her second fastest performance ever and for the 23-year-old Tirop, a lifetime best.

“I am so happy because this is my favourite track and I have done my best and I ran the way I wanted to,” said Obiri, who took the 2017 world title in London Stadium. “In the last lap I was thinking, work hard and I said to myself when I went past Hassan, ‘Let me go and see if you can catch me’.”

She couldn’t, but still clocked 14:22.12 to improve her own European record by 0.12, nine days after breaking the world record in the mile.

For the locals, the women’s 100m was the headline attraction of the meeting’s second day, given the presence of triple European champion Dina Asher-Smith. She opened the day well, cruising to a 10.91 win in the heats. But Fraser-Pryce was much more relaxed with a 10.95 run in her heat, an apt precursor for her dominant run in the meet-capping final.