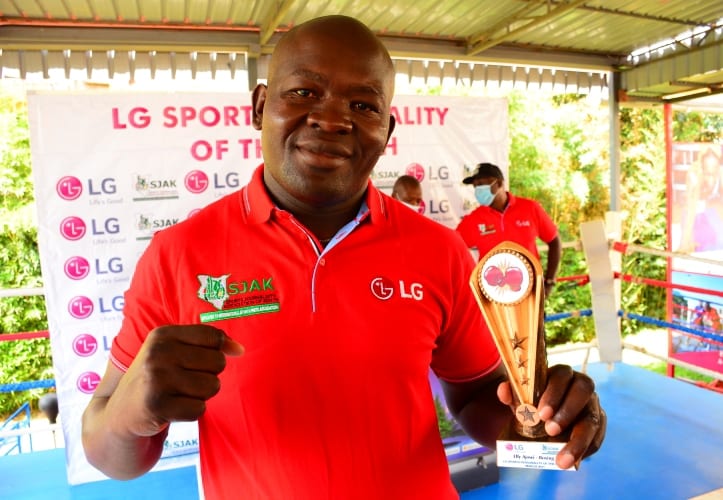 Kenya Team “Hit Squad” heavyweight Elly Ajowi has been named the LG/SJAK Sports Personality for the month of March.

The National Police Service Corporal was outstanding during the Africa Zone 3 Boxing Championship held in Kinshasa, DR Congo in March.

Earlier in the month of March, Ajowi qualified for Tokyo Olympics Games by virtue of a decent heavyweight ranking at continental level.

The Police “Chafua Chafua” heavyweight was all smiles upon receiving a 55-inch Nano Cell TV set from title sponsors LG under the “Nano Ni Noma” campaign.

“It’s such a great feeling to be selected as the best sports personality of the month. This has motivated me to even aim even higher at this year’s Tokyo Olympics. It was not an easy thing to fight my opponent given that it was my first fight in Super Heavyweight. My strategy was to make calculated shots while also defending gallantly. I’m glad I was able avenge the match I lost to the Cameroonian in the run up the final,” Ajowi said.

“I wish to congratulate Elly Ajowi for his stellar performance during the month of March. We celebrate and wish him all the best in the 2020 Tokyo Olympics. Recognizing and rewarding performance is an important step in identifying and nurturing local sporting talent. Kenya is known globally for her sporting talent especially in athletics, and we are seeing promising talent in other disciplines, hence our decision to collaborate with SJAK to advance development of sports talent in Kenya,” said Kim.

SJAK President Chris Mbaisi thanked LG for their longstanding partnership with SJAK, adding that “recognition of sports personalities is a positive way of appreciating Kenya’s spirited gains in sport.

The gold in DR Congo went down in history as his career best and adds up to bronze medals he won during the 2015 and 2019 editions of African Games in Congo Brazzaville and Rabat, Morocco respectively.

In a rare move, Ajowi took the big risk of moving a berth up from Heavyweight to Super-Heavyweight and surprised all and sundry on his debut in boxing’s highest weight division.