Holder Jepchumba, Komon up for Prague Half Marathon 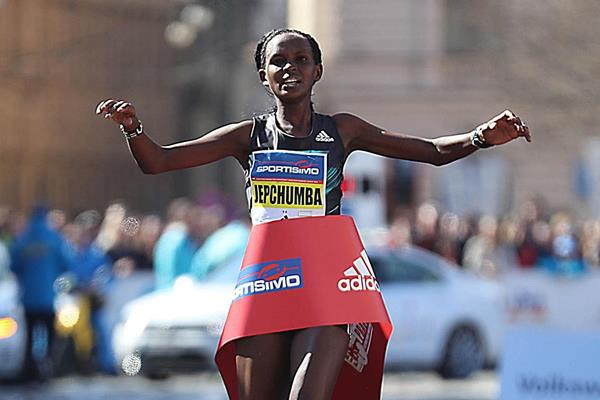 Sportisimo Prague Half Marathon champion Violah Jepchumba will defend her title at the IAAF Gold Label Road Race on Saturday.

Jepchumba was the star performer in Prague last year as she took more than three minutes off her best to break the course record with 1:05:51 – a performance which, at the time, put her third on the world all-time list.

She returned to the Czech capital later in the year to triumph over 10km in an African record of 30:24, missing the world record by just three seconds. Since her victory in Prague, Jepchumba has gone on to win half marathons in Istanbul, Gothenburg, Cardiff and Doha.

World half marathon champion and world record-holder Peres Jepchirchir had been set to compete in Prague this weekend, but a recent bout of typhoid has ruled the Kenyan out of the race.

Still, Jepchumba will face tough opposition in the form of compatriot Joyciline Jepkosgei. The African 10,000m bronze medallist smashed her half marathon PB by almost three minutes in Ras Al Khaimah earlier this year to finish third in 1:06:08, moving to seventh on the world all-time list. The 23-year-old also has a good record of racing in the Czech Republic as she won the Karlovy Vary Half Marathon last year and finished second to Jepchumba over 10km in Prague.

African Games 10,000m silver medallist Gladys Chesir will also be a factor. After setting a PB of 1:06:57 in Ras Al-Khaimah last year, she finished sixth at the IAAF World Half Marathon Championships in Cardiff. Later in the year she finished fourth in high-quality races in Copenhagen and New Delhi.

Just 20 years old, Lucy Cheruiyot has already contested five half marathons and has finished on the podium at all of them. She too has previous racing experience in the Czech Republic, having finished second at last year’s Usti Nad Labem Half Marathon in a PB of 1:08:17.

USA’s Jordan Hasay moved up in distance this year and clocked 1:08:40 on her half-marathon debut in Houston. The 25-year-old, who recently won the US 15km title, will be looking to improve on that mark on Prague’s fast course.

Komon’s PB of 59:14 makes him the fastest in the field and he will be trying to improve on his third-place finish in Prague from 2015. But he may still be feeling the effects of racing at last weekend’s IAAF World Cross Country Championships Kampala 2017, where he finished 12th in the senior men’s race.

Rupp, who took the bronze medal in the marathon in Rio, set his half-marathon best of 1:00:30 on his debut at the distance in 2011. This weekend’s race will be just his third half marathon to date and his first race of 2017.

Tola, who finished third over 10,000m in Rio, heads to Prague in the form of his life after running 2:04:11 to win in the Dubai Marathon in January. The Ethiopian set his half-marathon PB of 1:00:06 when finishing fifth at last year’s IAAF World Half Marathon Championships in difficult conditions.

But Barselius Kipyego is perhaps the marginal favourite for the title. The Kenyan set a course record of 59:15 in Usti nad Labem last September on what had not previously been considered a fast course. Before that, he finished second in Prague in 59:30 to miss out on victory by just 10 seconds, so he will be keen to go one better on Saturday.

Kenyan duo Geoffrey Yegon and Vincent Yator both have PBs within 60 minutes and could also challenge for a place on the podium.