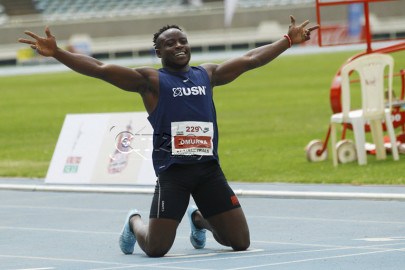 Ferdinand Omanyala reacts after winning men 100m final with a time of 10.02 sec during the 2020 Tokyo Olympic trials at the MISC, Kasarani on June 17, 2021.(Photo/ Kelly Ayodi/ Sportpicha LTD)

Africa's fastest man in the 100m, Ferdinand Omanyala, says he is fired up to challenge the world record of 9.58 currently held by Jamaican great Usain Bolt after setting a time of 9.77 at this year’s Kip Keino Classic in Kasarani Stadium.

In an interview with sister station Radio Citizen, the sprinter said his aim is to break the world record something he is sure will happen in the near future.

“I think 2021 has been my year, I was targeting to break the African record which I managed but now focus shifts to the world record. Competing against world greatest like Americans Trayvon Bromell and Justin Gatlin wasn’t easy, and they always encouraged me and I believe I can break Bolt record.”

During the Kip Keino Classic, Bromell stormed to first place in a world-leading time of 9.76 whereas his countryman, former Olympic champion, Justin Gatlin finished third in 10.03.

South Africa's Akane Simbine was the previous holder of the African 100m record, a time of 9.84 set at the Istvan Gyulai Memorial Meet in Hungary in July this year.

Omanyala's time also earned him a new national 100m record for the fourth time this year, breaking his previous time of 9.86 set at the International Josko Meeting in Andorf, Austria in August.

Apart from breaking the African record, Omanyala who was born and raised in Kitale, etched his name into the world record books as the eighth fastest man, even places behind Bolt.

Omanyala however has advised the Government to invest more on sports infrastructure so as to promote more talents.

“Being an athlete, I have travelled many parts of the world and sometimes I try to compare sports stadiums in Europe and Kenya and for sure there is a very big difference. The Government needs to uplift the stadiums standard as it is one way of promoting not only athletics but sports in general,” said Omanyala.