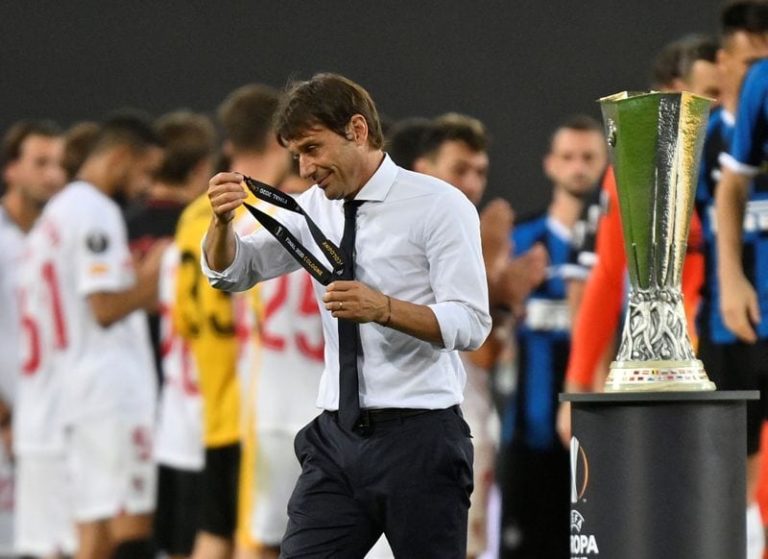 Antonio Conte said he has no intention of quitting Inter Milan following his side’s 3-2 defeat to Sevilla in a pulsating Europa League final on Friday.

The head coach’s occasional angry outbursts have seen him clash with Inter’s senior executives since taking over the reins in 2019 but the 51-year-old maintained that he would be staying with the club.

“There is no rancour, from me nor the club. There are people I already worked with, so that’s not the issue,” Conte said in a post-match interview.

“It’s about points of view, some situations that I faced this year and didn’t like, with all due respect for everyone.

“We’ll clarify the situation, without rancour, because I will always be grateful for having the chance to spend a great year at Inter, but on the other it was also very tough … if you think I will step back, I won’t.”

Conte was left rueing the bad luck of Romelu Lukaku, who scored 34 goals this season after arriving from Manchester United but who ended up deflecting Diego Carlos’s overhead kick into his own net in the second half.

“It was a tough, well-balanced game where in the second half one incident could change it. We had the opportunity, but instead there was that unlucky deflection off Romelu, so inevitably it became very difficult after that,” Conte said.

“We have regrets to a degree, as the team gave everything it had against a team with a great deal of experience that was accustomed to these occasions and that had won the final many times. In the end, that made the difference.”