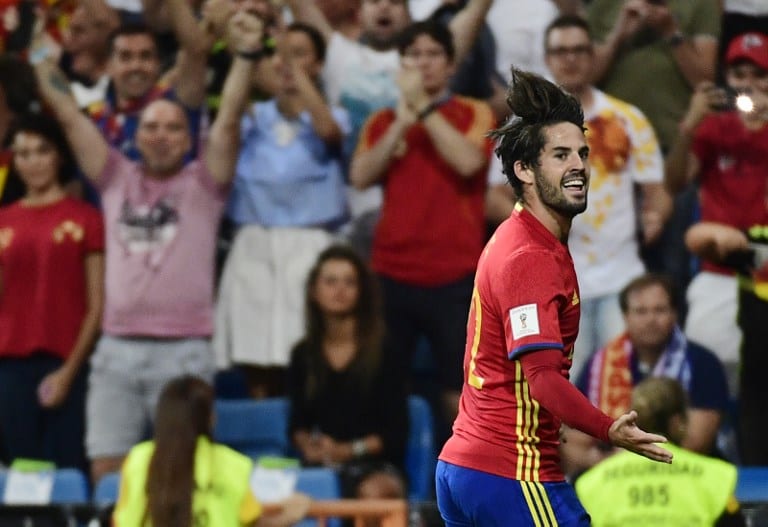 Following a demolition job on Italy, Spain look to cement their status as one of the favourites for next year’s World Cup with another thrashing of Liechtenstein on Tuesday.

Inspired by Isco’s array of silky skills and clinical finishing, La Roja swept aside Italy 3-0 on Saturday night to take a commanding three-point lead at the top of Group G of European qualifying.

After early exits as defending champions at the 2014 World Cup and Euro 2016, Spain’s display was reminiscent of the side that won three back-to-back major tournaments between 2008 and 2012.

“With the attitude with which we have played the World Cup is very close,” said Isco, whose close control and two goals left even Italy boss Giampiero Ventura singing his praises.

The climax of Spain’s golden era was a 4-0 humiliation of Italy in the final of Euro 2012.

Yet, that generation seemed to have had its time when Italy outclassed and outfought a jaded Spain just 15 months ago in Vicente del Bosque’s final game in charge at Euro 2016.

Under Julen Lopetegui, though, La Roja have rediscovered the precise passing and pressing that once made them the most feared side in international football with a mixture of youth and experience.

Isco was one of just four changes from the side that lost to Italy at Euro 2016.

But around them Spain have another enviously talented generation ready to shine.

Marco Asensio made his first competitive international start on Saturday at just 21.

“You only have to look at almost any Spanish player to see they have played in three Champions League finals and in our side there are very few (with that experience),” lamented Ventura.

Such competition with Spain and Real Madrid has meant even a player of Isco’s talent has had to wait for his opportunity.

Only in the past six months has the man nicknamed “magic” by his Real teammates managed to hold down a regular place in the starting line-up at the Bernabeu.

Indeed, his form at the end of last season was so spectacular that Gareth Bale was relegated to the bench for the Champions League final on his homecoming to Cardiff as Real routed Juventus 4-1.

“I haven’t played many games for the national team, but this was perhaps the most special,” Isco added after his taming of the Azzurri.

“Confidence and continuity is very important for these things.”

Lopetegui has also underlined the significance of Isco’s growing importance to Madrid for his maturation on the international stage.

“Playing regularly, gaining important experience with his club and with us means that as a footballer he is growing,” said Lopetegui.

“Isco has always had quality and now he is becoming a great player.”

Lopetegui is the envy of many international coaches with the quantity of great players at his disposal.

A Liechtenstein side that lost 8-0 on their visit to Spain a year ago are unlikely to pose any serious threat.

Whether Lopetegui’s Spain are up to the vintage of 2008 to 2012 will only be properly tested once they get to Russia in June.