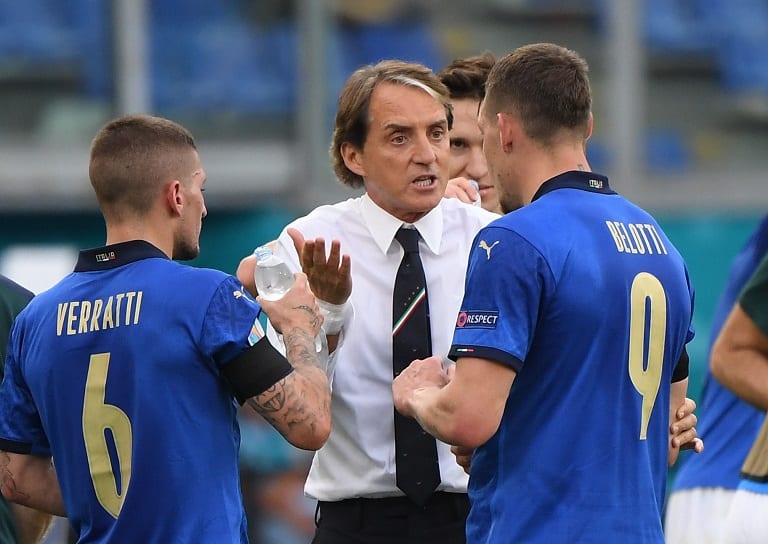 After making eight changes to his team but still beating Wales 1-0 to top Group A at the Euros on Sunday, Italy coach Roberto Mancini said the result showed his entire squad bought into the “product”.

“The guys are very clever and they wanted to win every game, they have a good mentality,” said Mancini after Matteo Pessina’s 39th minute goal secured the Azzurri a third straight win.

“I’m very happy also for this reason because we changed eight players and we played a very good game.”

“The identity has remained the same and I think it is important. I say that changing a few players shouldn’t change anything because everyone knows what they have to do, and the product doesn’t change,” he added.

Marco Verratti returned to the midfield after his recovery from injury cost him the chance to start in the opening two games but asked if his excellent display meant he had won back his starting place, Mancini dismissed the concept.

“Today they have shown that they are all starters. It was a game that we wanted to win even if it could be unneeded, but succeeding was a matter of mentality, it wasn’t easy. There are no starters, there are only the 11 who go on the pitch,” he said.

Wales defended doggedly, even after going down to 10 men after Ethan Ampadu was sent off in the 55th minute, but Mancini wasn’t upset that his team failed to make the most of their numerical advantage.

“It is always difficult to win. I think we played against a good team, because Wales is a good team but we deserved to win.

“We couldn’t have done better. We could have scored a goal more but they defended all the game and they are a physical team, and on top of that it was hot,” he said.

But the Italy coach said things would get much tougher in the knockout stage.

“We are happy. But we know that after the group stage we start a new European championship, now it will be different.”