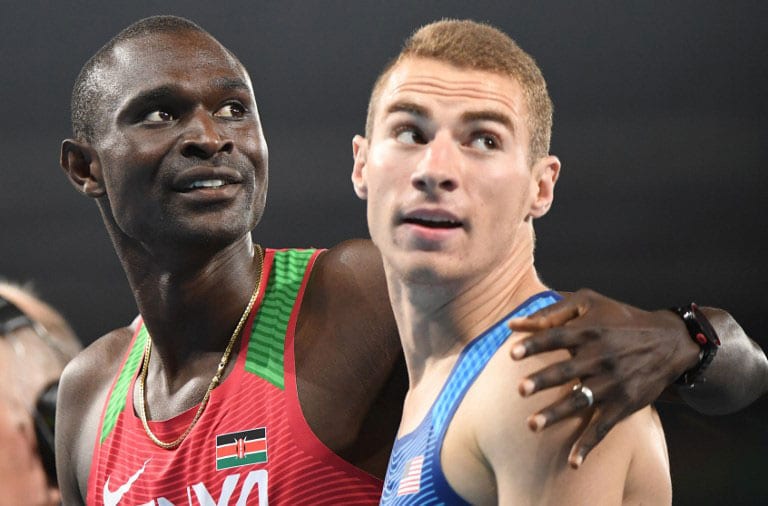 Day 10 of the 2016 Games sees 17 gold medals looking for a home. Track and field account for five of the finals with Rudisha taking centre stage at the Olympic Stadium.

The Kenyan coasted through the semi-finals at the weekend, but pretenders to his crown include his fellow countrymen Alfred Kipketer and Ferguson Rotich.

The other two finals are in the women’s hammer and women’s 3000m steeplechase.

Over at Rio’s gymnastics venue Biles, fresh from scooping a third gold on Sunday, goes for number four on the beam.

The home crowd will be rooting for Flavia Saraiva, the 1.33m tall 16-year-old who is in the strange position of trying to kybosh her self-proclaimed idol, Biles.

The 2016 Olympics hosts’ also have Arthur Zanetti to support in his quest to defend his London 2012 men’s ring title.

Gymnastics’ third gold could be winding its way back to Pyongyang as North Korea supplies the favourite for the men’s vault in the shape of Ri Se Gwang.

Ri is aiming to become only the second male gymnast gold-medallist from his country.

With action in the pool wrapped up it’s the turn of the open swimmers to make waves in the women’s 10km marathon off Copacabana.

Fears of pollution combined with pounding waves and gusty winds that washed away the starting platform on Saturday are all being put to one side as this hardy bunch go for gold.

Brazil have legitimate hopes of the title with Poliana Okimoto and Ana Marcela Cunha, who came in first and second in the 10K at the 2013 world championships.

Back on dry land and at the Deodoro military camp outside Rio Britain’s Charlotte Dujardin and her brilliant horse Valegro, are favourites for the individual dressage title.

The pair are Olympic, world and European champions. They also hold the world record score in the discipline known as ‘ballet on horseback’ of 94.300%.

Out to rain on Dujardin’s dressage parade is Germany’s Isabell Werth, seeking a record-equalling sixth gold medal, all in dressage.

At the Velodrome, British cycling star Mark Cavendish attempts to fill in a glaring blank on his curriculum vitae with an Olympic title in the omnium.

The rider from the Isle of Man, winner of no fewer than 30 Tour de France stages, is placed third after day one.

In the boxing ring Russia’s world and European amateur champion Evgeny Tishchenko has a heavyweight assignment with Kazakh Vassiliy Levit.

Magic Monday is completed by gold medals in sailing where Brazil’s Robert Scheidt aims to become the first sailor to win a medal at six Games in the laser.

There are also golds up for grabs in weightlifting and Greco-Roman wrestling.