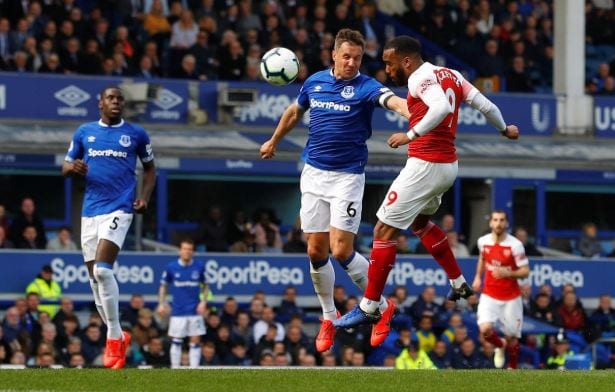 Arsenal’s hopes of a top-four finish in the Premier League were dented on Sunday as Everton captain Phil Jagielka took advantage of an unexpected late recall to score the winner in a dominant 1-0 victory at Goodison Park.

The veteran defender, who was brought into the team for a rare appearance after Michael Keane had to withdraw in the warm-up through illness, scored after 10 minutes to earn his side a well-deserved third straight league win.

It marked a significant setback for disappointing Arsenal, who remain fourth in the table but missed an opportunity to leap ahead of their third-placed north London rivals Tottenham Hotspur.

Unai Emery’s side stay on 63 points, one behind Spurs, level with fifth-placed Chelsea and two clear of Manchester United in an increasingly tight battle for the Champions League berths.

The experienced Jagielka proved Everton’s unlikely hero after his late call-up, becoming the oldest goalscorer in the league this season at 36 years 233 days when he poked home his finish after Arsenal failed to clear Lucas Digne’s long throw.

It signalled a hungry and aggressive display from Everton who, while moving up to ninth on 46 points, could have won more convincingly if Gylfi Sigurdsson and Richarlison had taken their opportunities.

Arsenal, who yet again conceded on the road as they have done in every league match this season, came closest with one curling second-half effort from Henrikh Mkhitaryan but were outplayed and outfought by Marco Silva’s team.