Javelin star Yego adds another feather to his cap, graduates with a Degree in Public Policy 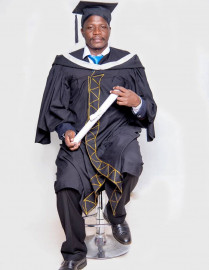 His latest feat shows, that with determination, athletes can shine on the track while also scaling the academic heights.

Julius Yego is known for his prowess on the track and field, as a star javelin thrower. In fact, in this discipline, he is a recognizable global star having won gold at the World Championships in Beijing 2015 and Silver at the 2016 Rio Olympics in Brazil.

However, that is not all. Yego, 32, on Friday added yet another feather to his cap after he graduated with a Bachelor of Arts degree in Public Policy and Administration from Kenyatta University.

His latest feat shows, that with determination, athletes can shine on the track while also scaling the academic heights.

His latest achievement makes him join the burgeoning list of Kenyan athletes who have done well, academically and also in sports.

Bernard Mang'oli, Paul Mungai Kiongera, to mention but a few, are some of the athletes who have university degrees while speedster, Africa’s quickest man, Ferdinand Omanyala, is also a Bachelor of Science student at the University of Nairobi.

Yego, known for being an outspoken athlete competed at this year's Olympic Games in Tokyo Japan but did not win a medal after making a throw of 77.34m.

Besides his 2016 Olympic success and the World Championship title, he won another javelin title at the All-Africa Games in 2011 and at the African Championships in Athletics in 2012 and 2014.