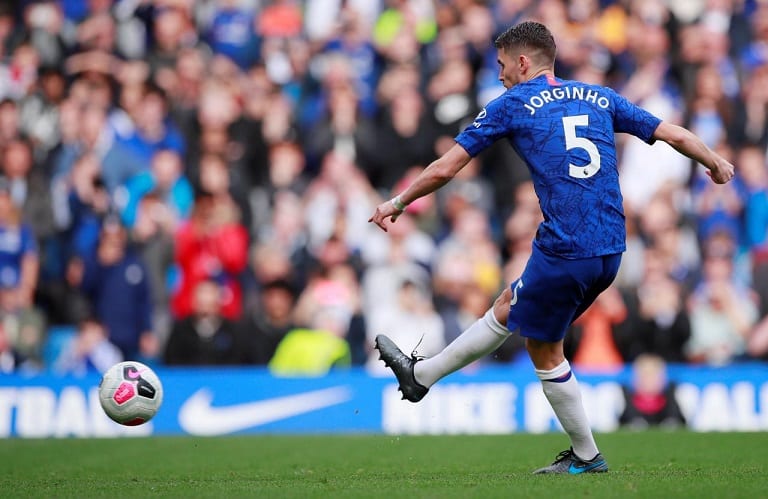 Second-half goals from Jorginho with a penalty and Willian’s deflected shot earned Frank Lampard’s Chelsea a 2-0 victory over Brighton and Hove Albion on Saturday, their first home Premier League win of the season.

Jorginho slotted the penalty into the bottom corner after Brighton defender Adam Webster had miscontrolled the ball and brought down Mason Mount as the young Chelsea midfielder rushed in to take advantage.

Willian fired home after a crossfield ball from substitute Callum Hudson-Odoi in the 76th minute. Goalkeeper Mat Ryan, who had held Chelsea at bay for most of the game, was wrongfooted by a deflection off Dan Burn.

Much has been made of Lampard’s use of young players in what has been described as a transitional season for the London side.

But the former long-serving Chelsea midfielder said his youngsters also needed to learn from the attitude of seasoned players such as Brazilian-born Italian Jorginho and Brazilian Willian.

“The work ethic was great from Willian today,” Lampard said. “They set the standards and the youngsters must follow.”

Chelsea had 17 attempts on goal in the first half alone but were unable to turn their pressure and high tempo possession into goals.

“The home games have been frustrating so far this season,” Lampard said. “You could almost feel the frustration in the first half today.”

Lampard told the players at halftime the goal was coming.

“I told them don’t get despondent, don’t get flat. It was important to say that,” he said.

Brighton were forced to attack after the penalty but failed to make their few chances count. Steven Alzate had a shot deflected wide and Burn headed down a corner that bounced high and hit the crossbar in the 73rd minute.

It was also Chelsea’s first clean sheet of the season.

“We never looked like conceding today and that was a big plus,” Lampard said.

The result lifted Chelsea, who lost at home to Liverpool last week after drawing Stamford Bridge games against Leicester City and Sheffield United, to sixth in the Premier League. Brighton are a point off the bottom three in 16th place.