Kamworor to headline Copenhagen Half Marathon 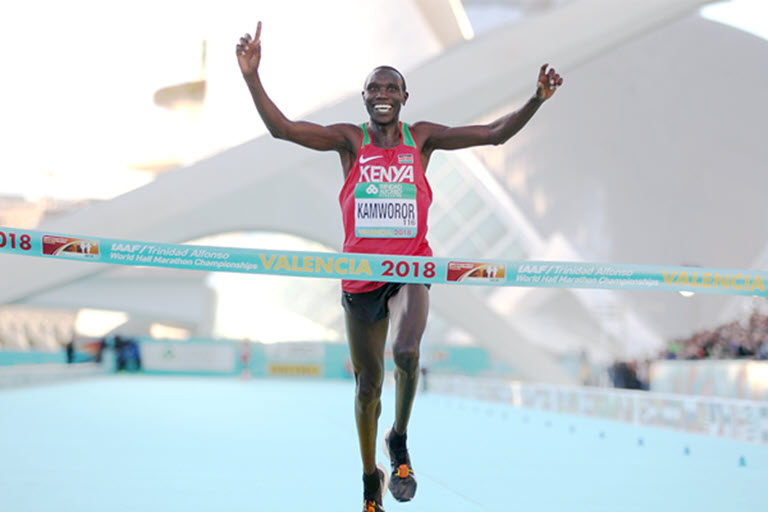 Once again, a high class field will line up for the fifth edition of the Copenhagen Half Marathon on Sunday with Geoffrey Kamworor leading the men’s field.

The three-time world half marathon champion will start as the clear favourite while the women’s race seems more unpredictable as it comprises eight women with sub-1:08 personal bests.

Having won three consecutive world titles over the distance, Kamworor returns to the city where he took the first of the victories with his triumph at the 2014 edition of the championships.

After his breakthrough, Kamworor would go on the reclaim the titles in 2016 and 2018 as well as the world cross country championships in between and a victory at the 2017 New York City Marathon.

Naturally, the spotlight this Sunday is on the formidable Kenyan athlete with a 58:54 personal best, but he will be facing fierce competition in the streets of the Danish capital running against a dozen men who have dipped under the one-hour barrier.

Among them are Moses Kurong of Uganda, who clocked his 59:50 personal best in Copenhagen in 2017 and Eritrea’s Abrar Osman, who improved to 59:47 in Lisbon last March. On paper, Kenyans Simon Cherop (59:20) and Edwin Kiprop (59:26) are the next fastest after Kamworor.

European fans will have their eyes on Sondre Nordstad Moen, the former continental record holder in the marathon, who comes armed with a 59:48 lifetime best.

In the women’s race, the spotlight will fall on former world record holder Peres Chepchirchir and Dorcas Jepchirchir, who with 1:05:06 and 1:06:33 personal bests are among the fastest in the field.

Chepchirchir, the 2016 world champion over the distance, returned to action in February after taking maternity leave in 2018 with a solid 1:07:36 performance in Ras Al Khaimah, her only half marathon of the year.

Ethiopia will be well represented with Genet Yalew and Dibabe Kuma who’ll both bring sub-1:07 credentials to the line.

Yalew, the winner of April’s Hamburg Marathon, improved her best to 1:06:45 in Barcelona this year while Yalew has gone even faster, clocking 1:06:26 in 2016 while improving her marathon best to 2:24:34 this year in Prague.