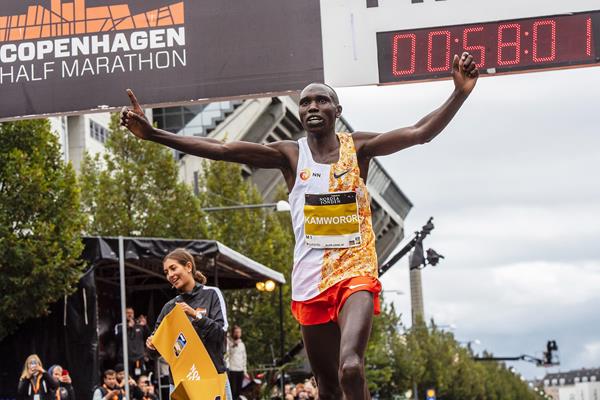 The 2015 world 10,000m silver medallist Geoffrey Kamworor has pulled out of the Tokyo Olympic Games on the eve of the event due to an ankle injury.

The former half marathon world record holder had been involved in a minor accident last year after he was hit by a speed motorcycle while training in Eldoret, sustaining knocks on his head and ankle.

Kamworor, a three-time world half marathon champion, had resumed full fitness winning storming to victory at the national trials just over a month ago.

The development comes as a massive blow for the athlete who was eyeing his maiden Olympic medal.

“This is the only medal I am missing in my career and Tokyo provides an opportunity for me to attain that. I am very happy especially with the time we achieved today. It shows with a little polishing we can make it in Tokyo,” said Kamworor upon winning the Kenyan trials at Kasarani Stadium.

He was set to team up with Rodgers Kwemoi and Weldon Kipkirui in the 25-lap race at the Tokyo Games.

Kenya has not won an Olympic gold in the men’s 10,000m since 1968 Games when the late Naftali Temu became the first Kenyan to bag the coveted medal.

Kamworor was set for a mouth-watering duel with world 5000m and 10000m record holder Joshua Cheptegei of Uganda.