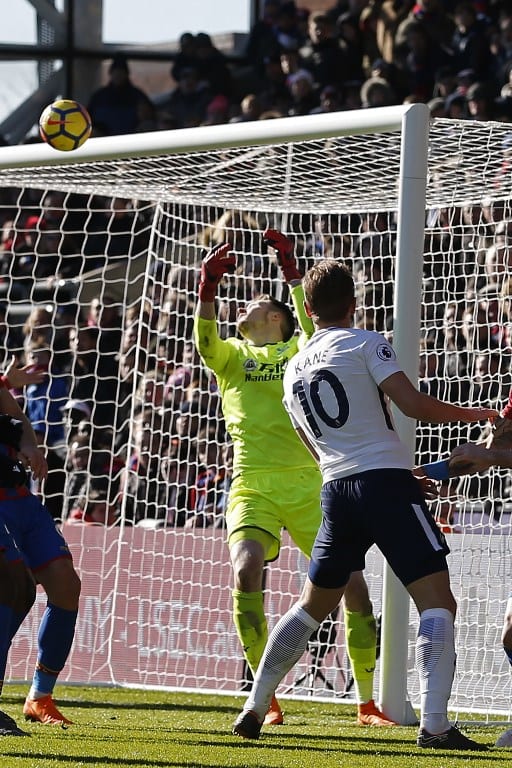 Harry Kane struck late to secure Tottenham Hotspur’s 1-0 victory at Crystal Palace on Sunday that moved Mauricio Pochettino’s side into the top four immediately ahead of Chelsea’s visit to Manchester United.

Spurs appeared set for disappointment after struggling to break down a Crystal Palace fighting to move clear of the relegation places.

But Kane finally found the breakthrough on 88 minutes, meeting Christian Eriksen’s corner at the far post and directing a header past goalkeeper Wayne Hennessey who should have done better after getting a firm hand to the ball.

“We left that very late. I thought it weren’t going to be our day, because we had a few chances, especially me…but we kept going until the end and eventually got our rewards,” Kane said after netting his 35th goal of the season.

The win pushed Pochettino’s men two points above Chelsea and while they knew the positions could be reversed by the end of the day, they could be satisfied they had increased the pressure on Antonio Conte’s side.

Pochettino made 10 changes to the side that drew with Rochdale in the FA Cup seven days previously but the more significant fact was that his line-up showed just one change to the team that drew at Juventus in the Champions League.

The withdrawal of Jan Vertonghen after the centre-back picked up a knock in training the day before the game meant Eric Dier slotted in alongside Davinson Sanchez in central defence in an otherwise familiar Spurs line-up.

By contrast, Hodgson’s hand was forced by the absence of 12 senior players, leaving the Crystal Palace manager with few options. 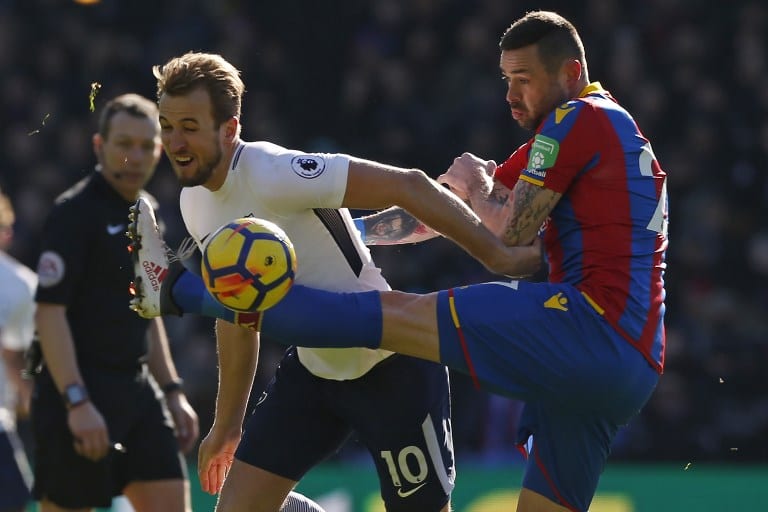 Aaron Wan-Bissaka, 20, came in at right-back for his senior debut and the depth of the home side’s injury problems was reflected on the substitutes’ bench where four of the seven replacements had yet to make a Premier League appearance for the club.

The makeshift nature of the Palace line-up was reflected in a disjointed start that could have seen Tottenham three up inside 16 minutes had the visitors made more of a succession of defensive errors.

Ben Davies should have done better after Andros Townsend unexpectedly failed to clear Eriksen’s free-kick although the left-back insisted he had a strong claim for a penalty after colliding with Hennessey.

Then two minutes later, an even better opportunity fell to Kane who was uncharacteristically wasteful when Patrick van Aanholt sliced a clearance into the forward’s path. Kane was only eight yards out but placed his shot too close to Hennessey who diverted the effort over the bar.

A third Palace error allowed Dele Alli to evade the offside trap and collect Eriksen’s floated ball over the top but the England midfielder rushed his attempt to direct a header over the onrushing Hennessey.

It seemed only a matter of time before Palace’s defence would be unpicked and Timothy Fosu-Mensah was fortunate an offside flag meant his clear foul on Kane inside the home area went unpunished.

But Hodgson’s side grew in confidence and began to cut out the mistakes as the first half progressed.

They offered little going forward, but by getting bodies behind the ball, the home side halted a succession of Tottenham attacking moves, leaving Kane frustrated at the lack of opportunities to come his way.

A sliced shot that flew high and wide by Kane early in the second half confirmed things were not going the visitors’ way. And having withstood the early pressure, Palace began to appear increasingly threatening on the counter-attack, without ever managing to test keeper Hugo Lloris.

Alexander Sorloth, the striker signed during the last transfer window, led two breaks that ensured Tottenham were forced to apply a degree of caution as they pursued the breakthrough.

But the visitors’ frustration was compounded when a third penalty appeal was rejected, this time after Alli went to ground following a clumsy challenge by Van Aanholt, before relief came in the form of Kane’s header.