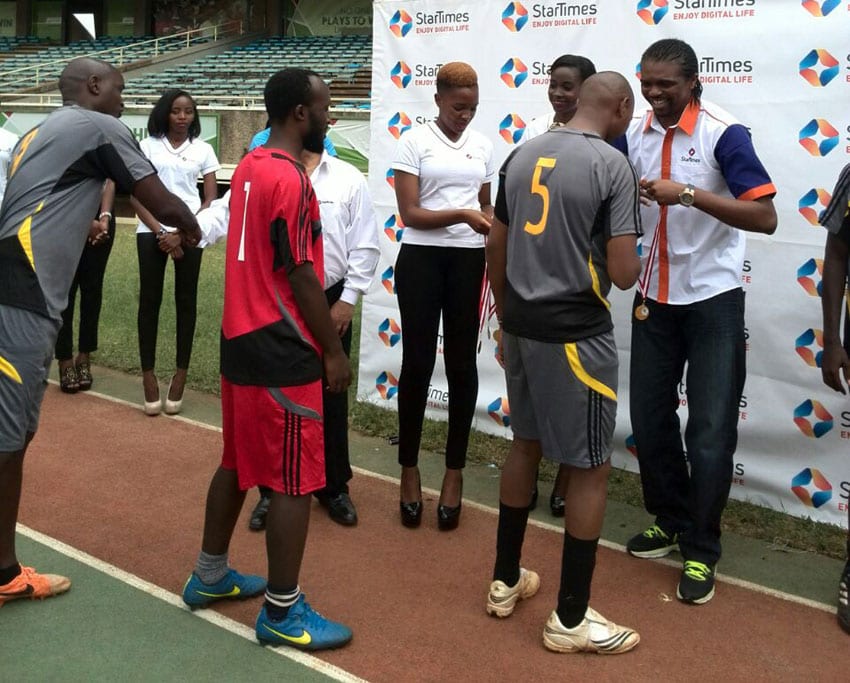 Retired Nigeria and Arsenal star, Nwankwo Kanu is pained by Nigeria’s elimination from the 2017 African Cup of Nations (AFCON) by Egypt having played his entire senior career without seeing the mighty Super Eagles miss out of the biennial continental finals expect in 1996 when they withdrew for political reasons.

The 2013 AFCON champions and 2014 Fifa World Cup round of 16 qualifiers will endure a second successive tournament in the cold having failed to reach the 2015 finals in Equatorial Guinea to defend their crown after losing 1-0 in Cairo in a game they had to win to top the group left with three teams after broke Chad pulled out.

The former Ajax Amsterdam, Inter Milan, West Bromwich Albion and Portsmouth star was speaking on Saturday at Nairobi’s Safaricom Stadium after coming as the chief guest of the StarTimes Media Challenge where the Royal Media Services team reached the quarterfinals.

“It hurts to be bundled out of the AFCON. It’s a shame Nigeria has been knocked out, we need to improve the quality of our football if we have to qualify,” the 39 year-old who played for the Super Eagles from 1994 to 2011 and led them to the 2000 final where they lost the trophy on penalties to Cameroon admitted.

He also paid homage to Harambee Stars squads of his generation confessing it was tricky to beat the national team in two-legged World Cup and AFCON qualifiers.

“When we played against Kenya, it was always a big fight. Physically they were strong and could run and that made it difficult for us but we always came out on top,” Kanu who is in the country on a five-day tour told.

Stars will join the Super Eagles in the 2017 AFCON scrap heap after crippling back-to-back 1-0 defeats to Guinea Bissau that left the side stuck in bottom place of Group E with a solitary point.

This is six adrift of the minnows who surprisingly top standings one ahead of both Congo Brazzaville and 2012 champions Zambia after their head-to-head clash ended with identical 1-1 scores.

The two-time Premier League and two-time FA Cup winner with the Gunners laid the failures of Nigeria and Kenya to qualify on the door step of their national governing bodies.

“We need to improve the quality of football, not only in Nigeria but African football as a whole. Federations need to realize that and help improve the quality of the game,” the forward who scored 12 senior goals in 87 caps for the Super Eagles and was part of the backroom staff when they lifted the 2013 crown in South Africa noted.

Kanu paid tribute to his first European side, Ajax Amsterdam where he was among of the budding young squad led by current Manchester United manager, Louis Van Gaal that swept all before them to win the 1995 UEFA Champions League with a swagger that still captures the imagination of football fans.

“ I made the right choice to play for Ajax. It was like a good school that everyone wants to go to. I did not know the impact of winning the Champions League until I sat down and realized how big it was,” the lanky former forward who still spots his famous corn-row hairdo shared.

“My childhood was not as easy as it seems. I used to play in the streets without shoes or a football jersey but I’m glad I made it in life to be someone who people can sit down and listen to. It’s a big achievement for me,” he added.