Kanu tips Iwobi to be an Arsenal legend 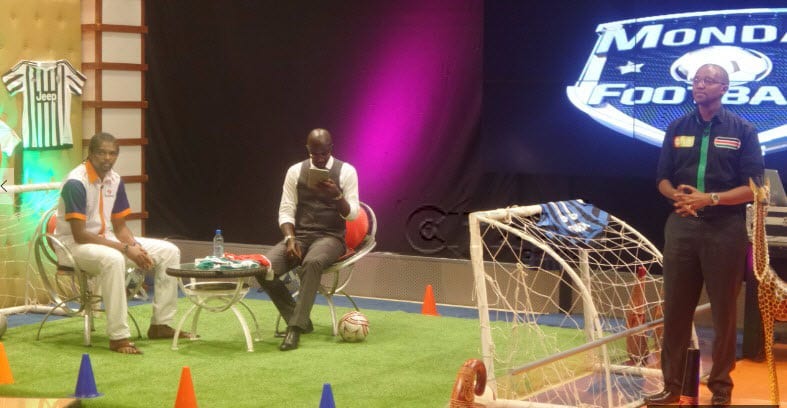 Retired Arsenal legend, Nwankwo Kanu has tipped rising Nigerian Gunners sensation, Alex Iwobi to hit the heights at the North London giants where he won two Premier League and FA Cup titles at the height of his prowess.

Speaking on Citizen TV’s Monday Football show, Kanu who is on a five-day trip to Kenya as a brand ambassador of StarTimes says the 19 year-old forward who is a nephew to fellow Super Eagles legend, Austin ‘Jay Jay’ Okocha has what it takes to follow his footsteps as an Arsenal celebrity.

“When you watch him, you can see he’s very talented and his touch, his first touch is fantastic and that’s what you need in a player.

“He’s related to Jay Jay Okocha, I know he’s talking to him every day but the first time I met him, I tried to encourage him, talk to him.

“The good thing about him is that he’s cool headed, he’s wants to learn and a for player who wants to learn, who’s got all that talent, the sky is the limit,” Kanu who scored 30 goals in 119 appearances at Arsenal said.

Iwobi scored his second Premier League goal for the Gunners in their 4-0 rout of Watford on Saturday and assisted the opener for Alexis Sanchez to draw parallels to the retired striker who captured imagination in North London.

The youngster fielded for Nigeria for the first time since declaring for them over England in their 1-1 draw against Egypt at the 2017 AFCON qualifiers in Kaduna before the Super Eagles crashed out of the competition when they lost the return 1-0 in Cairo.

The former Ajax Amsterdam, Inter Milan, West Brom and Portsmouth striker, 39, told studio audience he rates the Gunners where he was part of the revered title winning sides of 2002 and the ‘Invincibles’ of 2004 as his favourite team.

“I will say Arsenal. After the operation they had to go after me for four months and it means they really wanted me and when I came to Arsenal, it was like a gamble. People were like is this wrong? Can he do it? But I had to prove them wrong and I did it that’s why it was special.”

Since arriving in the country as the new head coach of SportPesa Premier League champions, Gor Mahia, retired Brazil defender, Ze Maria has faced countless questions about the run-around Kanu gave him at the semi finals of the Atlanta 1996 Olympics.

A Kanu double saw the Super Eagles recover from a 2-0 deficit to win the game 3-2 with a golden goal in extra time from the forward affectionately known as ‘Papilo’.

“If I see him now, I would like to shake his hand and congratulate him for being a coach. I would tell him don’t worry, that’s football.

“He was there to stop me from being who I am and I’m there to score goal and make sure he does not do that. It happened that during that battle, I won and I think if he sees me, he’ll shake me (my hand) and offer a drink,” the retired star said with a laugh.

But he does not expect to follow Ze Maria’s footsteps into coaching having been part of the backroom staff in the AFCON title-winning side of 2013 under former Super Eagles captain Stephen Keshi.

“Coaching is not an easy job especially in Africa. I grew up to respect and support the coaches and be there for them.

“As it is now, they tend to respect the foreigners more than the locals and for someone like me, I know my reputation, I know who I am and if I want to be a coach, everything will be on deck to perform,” he explained.

Kanu who also captained his national side rued their decline after missing their second AFCON final in a row.

“Things are not going the way we want. The federation has problems and the more they settle down, they have peace it will help the players. Changing coaches a lot is not good for the team.”

And how does he see his life outside football and why are Nigerian players conditioned to exhibit skill over brawn?

“Fantastic. Loving it! I just play for fun, just to see whether I still got it. We normally compare Nigeria with Brazil and when look at a Brazilian player; you see the flavour, the Samba favour.