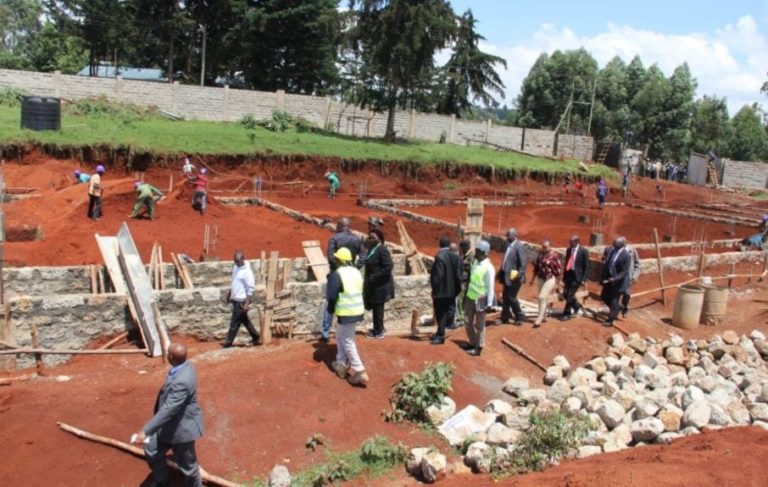 The Government has expressed serious concerns over the slow pace of putting up Karatu stadium, a 4,000-capacity modern sports facility under construction in Gatundu South, Kiambu County.

Three Cabinet Secretaries who made an inspection visit of the stadium took issue with Smith and Gold Productions Limited for dragging to complete the project which began in 2017 and whose completion was due in August last year.

Under the National Development Implementation and Communication Committee, the CSs who were led by Adan Mohammed, the CS for industrialization said they were disappointed by the delay.

During their tour, the CSs were shocked to find a handful of workers on site doing manual construction works with the land that is set for laying of grass remaining bare, years after the project began.

Speaking after the tour, Mohammed regretted that while the government has made all the payments for the project whose objective is to nurture talents at the grassroot level is paltry at 45 percent painting a blurry picture that it could remain an eyesore if urgent measures are not put in place.

While warning the contractor of serious consequences, the CSs insisted that the Sh260 million project must be completed in a period of four months for use by Kiambu residents.

They thereby directed the contractor to do a realistic plan of work which would enable him complete the project as promised.

So far, the project which comprises a VIP pavilion, football pitch and an athletics’ running track, their associated electrical, mechanical works and a perimeter wall whose contract has so far consumed Sh 124 million from the public coffers, money that the government officials said is not commensurate with the work done.

Raychelle Omamo and Charles Keter, the Cabinet Secretaries for Foreign Affairs and Energy alongside Kiambu deputy governor Joyce Ngugi who also joined Mohammed during the tour urged the contractor to redouble his efforts to ensure the project is completed within the set standards by April this year.

On his side, the contractor blamed the delays to funding challenges and change in designs but assured that the construction works for the project which has stalled severally will resume immediately.

Also in the tour was the project’s client, Sports Kenya, who complained that the contractor was playing a cat and mouse game and that he had not adequately mobilized the materials and machinery that could enable him deliver the project as expected.