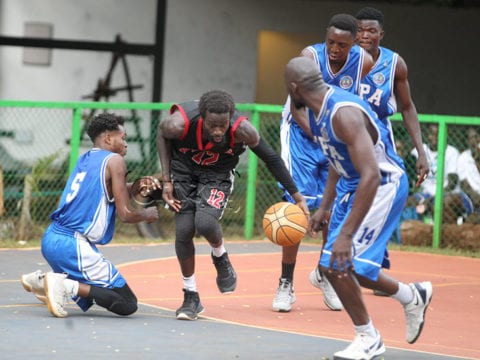 Odhiambo whose charges staged a late fightback to defeat a stubborn Eldonets side 64-59 at the MUSO Court in Eldoret on Sunday says they will go all-in for a finals berth come post-season, and is confident they have the resources to do it.

“Our objective at the moment is to be in a position to contend for the title and am glad we are on course to realize our season ambitions.”

On Sunday their resilience and contender credentials were on full display as they managed to shake off a poor start to earn a deserved win against a strong Eldonets side.

Eldonets dominated the first two quarters 17-12 and 12-11 to take a 29-23 lead into the break. Equity found a new lease in the second half, outscoring the Platinum Credit-sponsored side 19-12 and 22-18 in the third and fourth quarter respectively to cap a successful weekend.

Carey singled out perimeter shooting and turnovers as their major flaws that they will have to work on to realize their season ambitions.

“The turnovers were too many more so in the first half and I feel we need to work on that.

“Also, the players do not seem confident enough to attempt shots from behind the arc. This problem cuts across all teams in the league.

Eldonets head coach Morris Ouma was left fuming after their poor defense ended their weekend on a losing note having defeated Umoja 64-49 on Saturday.

Speaking to Citizen Digital, Ouma urged his charges to work on their defending, a fete that will help them close out games better.

“I attribute our loss today to poor focus. We were strong in the first half but conceded many uncontested points in the second half.

“We will work on this and am sure we will finish among the best four teams in the division.