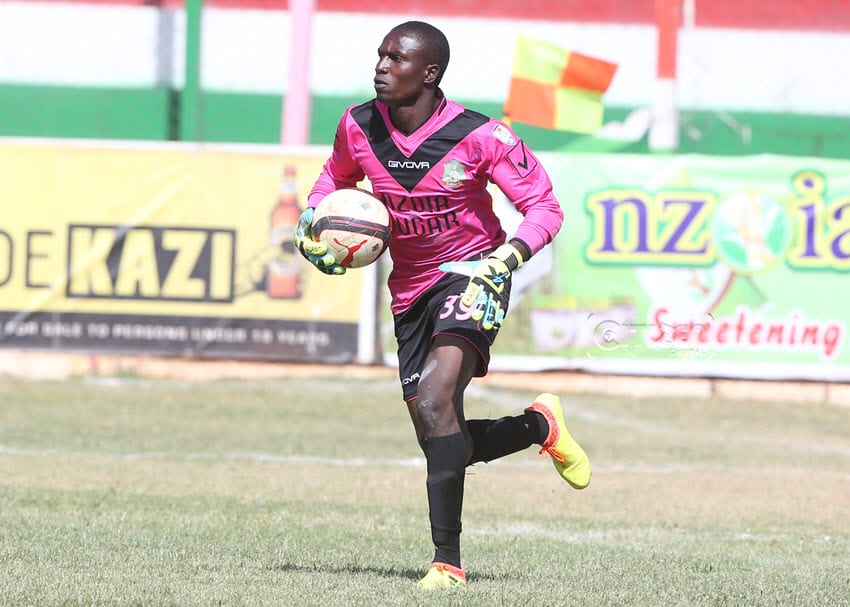 Nzoia Sugar FC are battling to contain a goalkeeping crisis ahead of their clash with Gor Mahia FC that will mark the highlight of Saturday’s Kenyan Premier League (KPL) encounters.

Nzoia are without their first choice goalkeeper Mustaspha Oduor after a knock in training, with second choice custodian Benson Mangala already sidelined with a long-term injury.

If Odour fails a late fitness test ahead of the match, youthful Humprey Katasi will be tasked with keeping K’Ogalo’s charges at bay as they look to avenge their 1-0 loss in May’s reverse fixture against the record champions.

“Facing big clubs like Gor can be intimidating to young players but we are mentally prepared for this. The boys are also looking forward to the game and I know they will give their best. Gor are currently at the top but this is a different game all together,” Nzoia Team Manager Evans Kadenge said.

Kadenge warned the KPL leaders Gor Mahia FC that victory will not be a given when the two sides clash at Kisumu’s Moi Stadium.

Gor, who sit six points clear at the summit of the KPL, will be looking to maintain their unbeaten run under Head Coach Dylan Kerr but Kadenge said they have the ability to bring the Englishman and his flying charges back to earth.

The encounter is one of six others on the cards across the KPL on the same day and is certainly the highlight as Gor look to pull further away from the chasing pack that is led by Sofapaka FC and Posta Rangers.

“We are not afraid to meet Gor. In fact we have told our boys to go and enjoy the game and avoid any sort of pressure. This is any other league match that could go either way. I believe we can win it easily if we stick to the plan we’ve been working on all week,” Kadenge asserted.

Nzoia, who lie seventh on the log have played two more matches than Gor, and are targeting to finish among the top eight teams.

Gor have earned 22 points away from home so far this season and Kisumu, often referred as their second home owing to the huge local support they enjoy in the region, has in past proven to be safe hunting ground for them.

There were questions over K’Ogalo’s preparedness for the fixture, with rumors of unpaid salaries and allowances and closure of their Canp Toyoyo training venue emerging earlier in the week.

However, Deputy Secretary General Ronald Ngala on Thursday poured cold water on the claims saying his team was more compact than ever.

On Sunday, AFC Leopards will be in Kericho to take on home team Zoo FC with Robert Matano seeking to register maximum points against a side that forced a 1-1 draw in the first leg.

The redeemer of Ingwe in that match Gilbert Fiamenyo already left the den, and Zoo, 10th on the log, is three places above their opponents.

“We are in good shape and we expect the players to play as Leopards players. We have always insisted to them there is always a special assignment to accomplish anytime they put on Ingwe jerseys. We don’t want to preempt anything but we are going for maximu points,” Matano told Citizen Digital.

Posta Rangers have a date with Nakumatt FC on Saturday at the Ruaraka Stadium, with the Sammy ‘Pamzo’ Omollo coached side itching to bridge the gap between them and leaders Gor.

Rangers’ thirst cannot be quenched with anything less than a win, after seeing Sofapaka leapfrog them to second having shared the summit of league with Tusker FC and Gor at some point.

“We have been slowed down in our past few matches. Sometimes we have been unlucky but it’s time we showed what we are made of,” Omollo told in a past interview.

In their last seven meetings, Rangers have defeated Nakumatt only twice, which makes their meeting difficult on paper.

Muhoroni Youth, who have escaped defeat only once in the past five outings, will be up against Ulinzi Stars who are fresh from winning the East Africa Military Games football medal.

Champions Tusker will be travelling to Awendo against Sony Sugar, the former attempting to their keep their decent record at the Awendo Green Stadium, where they last lost to their weekend challengers in 2014.

Sofapaka will be at their Narok home against Chemelil Sugar, knowing a win will take them to just three points below Gor if they lose in their Kisumu match.

Another pairing will see Mathare United square off with Western Stima, who they have failed to stop in the last for meetings. The 2008 champions have however been impressive, and have not lost in their last eight league matches.