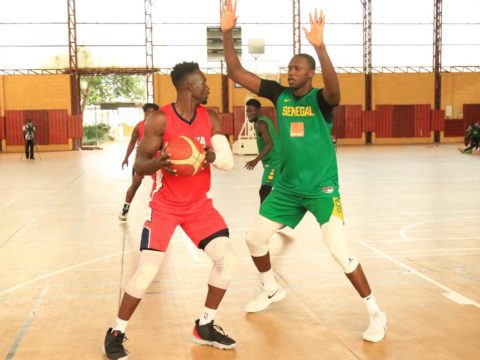 After an absence of 28 years in the FIBA Afrobasket Championship, Kenya national men’s basketball team returned to the championship with an aim of flying the Kenyan flag high but they couldn’t afford to reach the quarterfinals stage.

The Morans managed to reach the pre-quarterfinal round where they were eliminated by neighbours South Sudan 58-60.

Bush Wamukota, Morans’ superstar said blending of new blood in the team with the experience they got at the championship will help a lot as they prepare for world cup Qualifiers starting in November.

“Everybody was excited and gave their best in the games they played and they should be given credit and now we must keep our heads up and take that as a learning experience ahead of the world cup qualifiers which we are planning to conquer our opponents in the group,” stated Wamukota.

Assistant head coach Abel Nson admitted lack of their key three players affected them even though they played well.

“Generally, the Morans did very well, short-handed due to the absence of Joel Awich, Preston Bungei and Derrick Ongechi, those that played tried hard. The players learned the value of video usage and scouting reports. We were arguably one of the best defensive teams at Afrobasket because of that detail we had.

Our local based players really outdid themselves for the first time at this level and we applaud them,” Nson said.

On lessons learnt, Nson had this to say: “We need to do offensive awareness, ball handling and passing, decision making, shooting and finishing. Those are some key areas to improve on. We didn’t shoot well neither at the 3-point line nor the free throw line.

On the positives, we realized that our fast pace and resilience is actually an issue for all the established teams. They are more comfortable with a controlled pace. We have to now make this an identity and work towards perfecting this and how to use it to our advantage. Hoping to get back to work ASAP and build on this,” he added.

But the question many basketball enthusiasts are asking is, if we could defeat South Sudan in the qualifying round, how could they defeat us in the main championship? Lizz Mills is the head coach of Morans and tells us why.

“That was the difference in this game. I believe we put ourselves very well to win this game in the second, third and fourth quarter but the truth is you can’t start a game ten nil down then fight back there is a lot of talent in that south Sudanese side they are really well-coached.

I think we dug ourselves a hole which we have done in a couple of games and I think it’s a great learning opportunity for us heading into the world cup qualifiers working on our side of the game getting ready to go from the tip-off,” Mills said.

Was winning one game at Africa’s biggest tournament important to the team? Griffins Ligare, Morans Captain tells us.

“I think we did a great job coming back & winning a game at Afrobasket. And I am so proud of every single one who is in this Moran’s team. In the pool games, despite the loss to Nigeria & Ivory Coast, we realized a whole lot of great things that we do, and we were happy to keep on doing them, and this helped us greatly in winning the third game vs. Mali,” he said.

Ligare added that despite the loss in the second round against Sudanese they showed great play and they have picked up crucial points as they head for the world cup qualifiers.

“Despite the loss, we showed resilience, & fought back from 20 points down to a one-possession game a thing that describes the Morans, we are a resilient group & we don’t give up: we keep fighting, Execution on both ends in such competition is very critical and plays a huge part for a team to be able to win games,” he added.

The captain who doubles up as Thunder men basketball team captain says they have gotten positive lessons from the championship which they intend to build on for the world cup qualifiers.

“There are plans for us to resume practice right away after Afrobasket, to get us back in the gym, and build on the positives we’ve had at Afrobasket & get ready for World Cup qualifiers. He added

About the future of basketball in the country, the soft-spoken captain said this.

“In the Moran’s team, we have young talented players that are part of our core and that right there is our future. Also back at home, we have young talents coming up, playing in the local league not forgetting our players in the Diaspora who are playing college basketball in the USA & professional basketball: all these meshed together will form a great future of Kenyan basketball,” he added.

Moran’s assistant head coach Sadat Gaya talked about how they played each game: “Our game against Ivory Coast was in it until the 3rd quarter, same with the Nigeria game. We lost two games in the 3rd and never came back. Our game against Mali we came out swinging.”

“We led it all the way, 4th quarter we almost lost it. Our game against South Sudan we had a bad start, we were down 20 points, we came back and we couldn’t complete the comeback,” Gaya said.

On the lessons learnt, Gaya said watching their opponents’ videos helped them: “Our video sessions and scouting report was on point. Our execution of the plan is where we didn’t do a good job. And the opponents made us pay, that’s an area we will work on. Going into world cup qualifiers in November or February there isn’t enough time, we need to hit practice to improve on that,” Gaya said.

“Team general performance was great; we showed up after 28 years and managed to qualify for the knockout stages. Nothing went wrong. We did what we needed to do. World cup qualifiers will be a stage for our young players to put in work. We have a chance, we just need to win two or three games,” Okal said.

In the group stage, Morans finished third after losing two games against Africa’s heavy weights Ivory Coast and Nigeria 70-88 and 55-71 respectively before winning their last group match 72-66 against Mali.

The championship was won by Tunisia who defended the trophy after hammering Ivory Coast 78-75 in the final.

Focus now turns to the world cup qualifiers that begin in November with Kenya being in pool D alongside Egypt, Democratic Republic of Congo and Senegal with coach Mills determined to cause an upset against the best in the continent.

In the just-concluded Afrobasket Championship held in Kigali, Rwanda, Tunisia successfully defended the trophy after crashing Ivory Coast 78-75 in the final.