Kenya Rugby Union Chairman Oduor Gangla has confirmed that the national rugby league, Kenya Cup, will run on as planned bar for the two fixtures (Nondescripts and Strathmore Leos, and Menengai Oilers versus Resolution Impala Saracens) that were postponed last weekend after confirmed Covid-19 cases.

Speaking to Citizen Digital, Gangla said that the welfare of players and technical staff is paramount and thus the move to postpone the fixtures after 12 positive cases of Covid-19 were reported in the last round of testing.

“We had to take precautions because players welfare comes first. We decided not to go into details on who was exposed, but those that returned positive results are in isolation,” said the rugby boss.

Gangla added that there will be another round of testing to ascertain whether those affected will have recovered in order to resume the league fixtures urging caution and vigilance from all stakeholders who he says must be aware of the risks of the virus amid a third and wave  in the country.

“We will test again and see when they can resume. We are just following the normal protocols. As soon as the teams are able to play, they will continue with their fixtures. We are currently in the middle of a spike in the whole country, and therefore we must continue with sensitization to all those involved. We have played the league for slightly over a month now and we didn’t have any other cases until last weekend, therefore we ought to be vigilant to ensure no one is at risk,” he explained.

Gangla however noted that the new developments in the league didn’t affect the national rugby teams; Shujaa and Lionesses, who are in high performance camps at Kasarani and Kenyatta University respectively. He further hinted that they were preparing the teams for an upcoming tournament that is organised to help them prepare for the Olympic Games scheduled for July 23rd 2021 – 8th August 2021.

“The national teams are already in camp. Shujaa are at Kasarani and Lionesses are training at KU and so far the training hasn’t had any hiccups. There is an upcoming tournament that the teams will participate in and we will give more details on the same later.

Shujaa’s head coach Innocent “Namcos” Simiyu has commended the players for settling in well and putting in the hard yards in preparation for the upcoming pre-Olympics invitational tournaments. 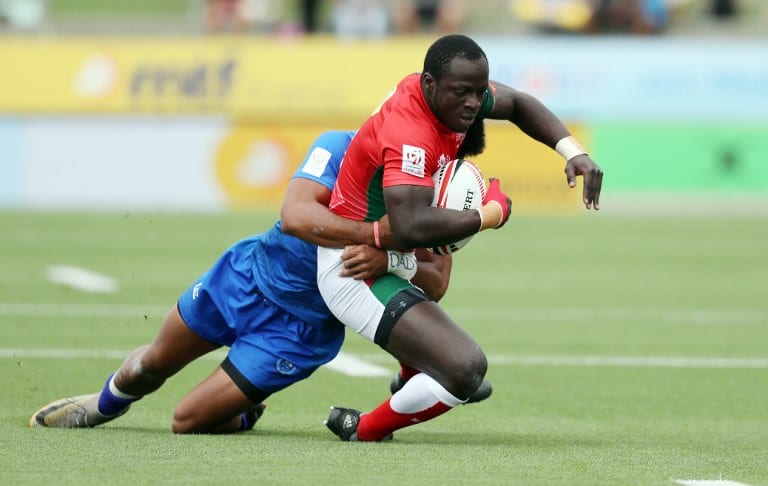 “We’re working towards executing our set piece plays better, getting some more match fitness for the players and improvement on their individual performances.

“We really appreciate the effort by the government, NOCK, Sports Fund and Sports Stadia for making this high-performance camp a reality. It will go a long way in ensuring the team performs well at the Olympic Games and hopefully get a medal,” he enthused.

On the other hand, Lionesses head coach Felix Oyoo said the team’s plan is to keep on improving tournament by tournament and will be at their optimum for the Olympics.

“Our rest and recovery protocols need to be very thorough going forward because it plays a big role in our performance. As a technical team, we have a player-centred approach where the players give suggestions on what they consider to work best for them on the pitch and the management team does the same, we then compare and go with what can be actualized more efficiently.”