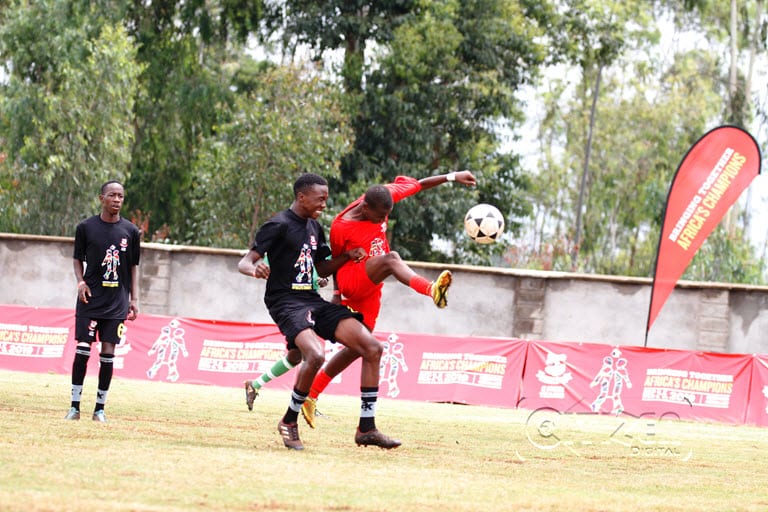 Defending champions Kenya inched closer to retaining the Copa Coca-Cola Africa Cup title after a 1-0 win against Botswana in a closely contested quarter final, on Tuesday at the Mpesa Foundation Academy Grounds in Thika.

Mohammed Mbaruk’s 66th minute penalty powered the hosts into the semi-finals of the four- day tourney, after the hosts struggled to break down the spirited opponents.

The Daniel Lonje coached Serani Boys will now meet impressive Tanzania in the last-four stage on Wednesday, after the latter whitewashed hapless Uganda  6-2 to sail through.

In the other quarter finals result, Zimbabwe grabbed the last four slot with a 4-1 win against Namibia, while Zambia eased through with a resounding 8-1 win against Angola.

Speaking after sailing through, Kenya’s gaffer Lonje praised his charges for the win but was quick to warn his wasteful goal poachers to be sharp in front of the goal.

“We have laboured for that win and comparing with how Tanzania has played against Uganda, we should be worried and pull up our socks in tomorrow’s match. We hope we will be full house against them after missing our key players due to injuries they picked yesterday,” he underscored.

His opposite number from Tanzania Abel Mtweve said if his arsenal will be sharp like they were against Uganda, he will be in pole position to knockout champions Kenya.

“Uganda was a good team but our game plan worked very well and now our focus shifts to the defending champions. We are optimistic we can replicate our good results in the semis,” he warned.

“We are very happy because these games are not only churning out new talent but also are bringing together the continent through sports. We will continue to partner with Coca-Cola to give our young children a platform to spur the growth of their talent,” Ngugi pointed out.

The tournament, which has attracted 10 countries drawn from different football associations in the continent, will close on Thursday.