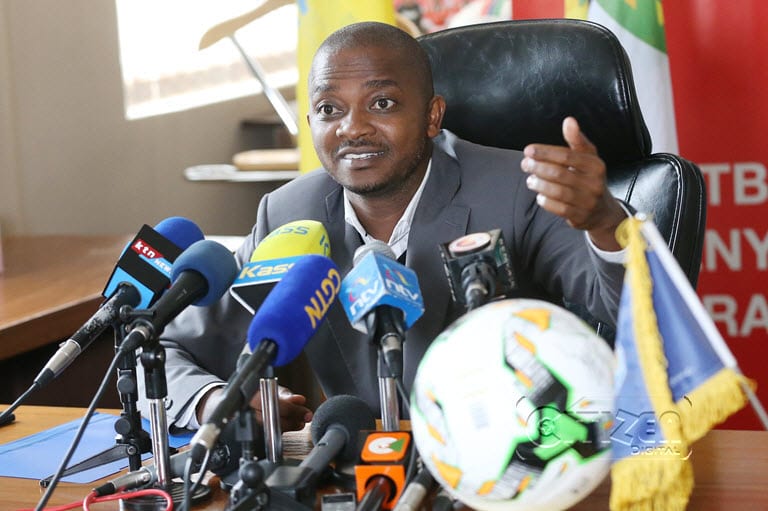 Kenya has pulled out of hosting the 2018 CECAFA Senior Challenge Cup that was set for December, Football Kenya Federation (FKF) president Nick Mwendwa announced on Tuesday.

Kenya was handed the rights to host the regional football tournament in 2017 after hosting a successful event where Harambee Stars beat Zanzibar on post-match penalties lift the gong.

“Kenya will not be able to host the CECAFA Senior Challenge Cup due to financial constraints. We have asked the organizing body to get a new host,” Mwendwa affirmed.

The development comes as a measure to reduce financial burden the federation is currently bearing, arising from inherited debts and claims from the former regime, led by former president Sam Nyamweya.

Mwendwa pointed out FKF is dealing with 12 cases, among them the Adel Amrouche and Bobby Williamson (both former Harambee Stars coaches) appeals following controversial contracts termination.

“I have time and again talked about money and finances, and the situation we found here. Our case against the former coach Adel (Amrouche) is ongoing, we appealed the one-man judge decision to award him $ 600,000 early this year hoping to have a good ending.

“Bobby Williamson is in the labor court claiming Ksh. 55 million, and we are trying to fight… It makes the running of the federation very difficult, thus we have to trim down our expenditures as much as possible, including withdrawing from hosting CECAFA and the 2019 African Women Cup of Nations (AWCON),” told Mwendwa.

He also revealed, that the Kenya Revenue Authority (KRA) is on the federation’s neck, claiming Ksh.41million from arising from employees’ PAYE that was never submitted between 2012 and 2015.

FKF has at the same time announced Kenya will not bid for any international event following the recently failed 2019 AWCON, with the shame of losing CHAN 2018 still fresh.

“When we learnt Ghana may not be able to host the 2019 AWCON, I made an application to CAF that Kenya would be interested in the event that Ghana failed. I asked for guarantees from the Government, we sent them on and inspectors were sent to inspect our venues. The report was released, unfortunately Kenya again cannot again host a CAF event, because we only have one stadium ready (Kasarani) while we need at least two venues,” narrated Mwendwa.

He continued; Therefore, we will not seek to host any other tournament until the time we will be satisfied we have ready venues.”

Nyayo Stadium is still closed up for renovation, since last year when Kenya was racing against time for CHAN 2018 that was later hosted in Morocco.

Other stadiums that were earmarked for the continental tournament, Kinoru Stadium and Kipchoge Keino Eldoret, are still far from completion almost an year down the line.

The announcement casts a dark shadow against the Government, that is solely responsible for sporting infrastructure development.

Meanwhile, FKF will be waiting for Kenyan Premier League (KPL) Limited’s report and sanctions on the culprits of the Kasarani Stadium seats damage on Sunday during the ill fated Mashemeji derby (Gor Mahia vs AFC Leopards), before taking a stern step depending on the outcome.