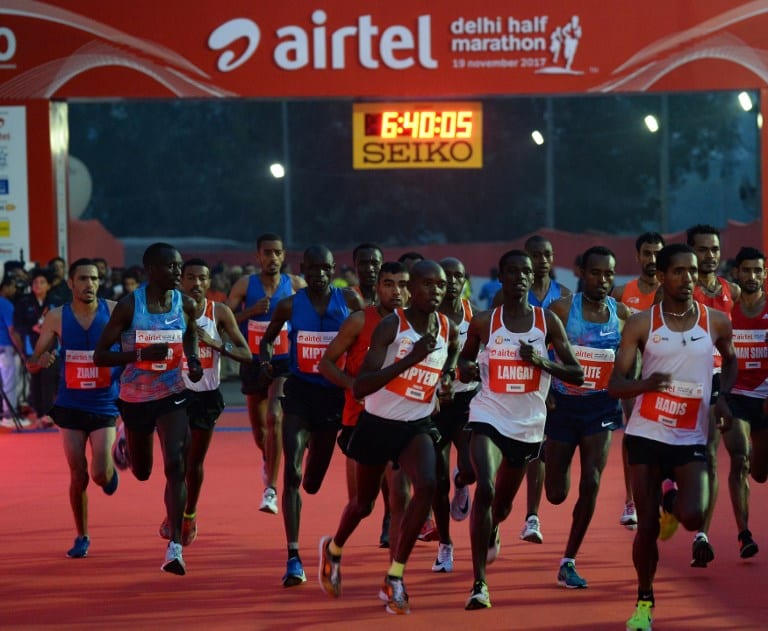 Kenyan athletes were humbled at the Airtel Delhi Half Marathon on Sunday as their East African arch rivals claimed the lions share of the podium places.
Ethiopian Berhanu Legese took the race honours in 59 minutes and 46 seconds, reclaiming the title he won in  2015, while countryman Andamlak Belihu and Kenyan born American runner Leonard Korir had a photo-finish of 59.51 each.
The men’s race started off at a steady pace as Edwin Kiptoo led the international elite men pack past 10km in 24.28 minutes until the 13.15km. World and Boston Marathon champion Geoffrey Kirui took the lead for the first time at 14 km, but lost the gas as the race wore on finishing sixth in 1 hr, three minutes.
Kirui’s worry was Philip Kipyeko, who was right on his heels until the 18km, when Ethiopian Berhanu Legese pulled a fast one on them to head for the top podium place.
In the women’s race, Ethiopian Almaz Ayana, the Olympic and two- time World champion made a spectacular finish, leading compatriots to a clean podium finish.
Ayana, the 10,000m London World Championships gold medallist claimed victory in 1 hour, 7 minutes and 11 seconds at  her debut over the distance.
Ababel Yeshaneh settled for second place in 1:07.20, about five seconds ahead of Netsanet Gudeta, who took third place in 1:07.25.
At the same time, tens of thousands of runners braved smoggy conditions for the race  despite dire health warnings from doctors who wanted the race postponed in the heavily polluted Indian capital.

Some runners wore face masks as they jogged through the visible morning haze and complained of side effects from the polluted conditions.

“My eyes are burning, my throat is dry. I have a running nose,” said amateur runner Rohit Mohan, a 30-year-old from the southern city of Bangalore who was among those donning a mask.

“It’s been terrible since I landed here yesterday.”

The Indian Medical Association had asked the Delhi High Court to postpone the event after a surge in pollution levels that it described as a public health emergency.

However, on Thursday, the court said it was satisfied by the organisers’ reassurances that they were doing everything they could to ease concerns, and the race was given the green light.

Most were amateur runners, but there were a handful of world-class athletes including Kenya’s Geoffrey Kipkorir Kirui, winner of this year’s London marathon.

Birhanu Legese of Ethiopia, who won the men’s race Sunday, said the pollution was “not that bad”.

“We were scared. I thought maybe it was going to be bad. They told us because of the pollution we might not run a good race. But we didn’t feel it that much,” he said after the race.

“I would say it was perfect to run.”

As the race progressed Sunday pollution readings climbed above 200 – levels at which active people “should avoid all outdoor exertion”, the US embassy warns.

“But here we are running a marathon,” said Ashish Shakya, 31, who for his part decided not to race because of the unhealthy air and watched from the sidelines in a mask.

“I know pollution is bad and it can affect my health but I am still participating,” said Sitam, who like many Indians goes by one name.

“I want to send a message to the government to do something for fitness enthusiasts and ensure a pollution-free environment for them.”

Telecoms giant Airtel threatened this month to withdraw its sponsorship of the event if authorities in Delhi failed to act to improve the city’s air quality.

Organisers Procam International conceded “that the state of air quality is not conducive” but rejected calls for the race to be postponed.

The course was sprayed with salted water to keep dust levels down and all traffic barred from nearby roads.

A 2014 World Health Organisation survey found Delhi was the world’s most polluted capital, with air quality even worse than Beijing.

Pollution regularly spikes across north India and Pakistan at this time of year as farmers burn the post-harvest crop stubble and cooler temperatures prevent pollutants from dispersing.