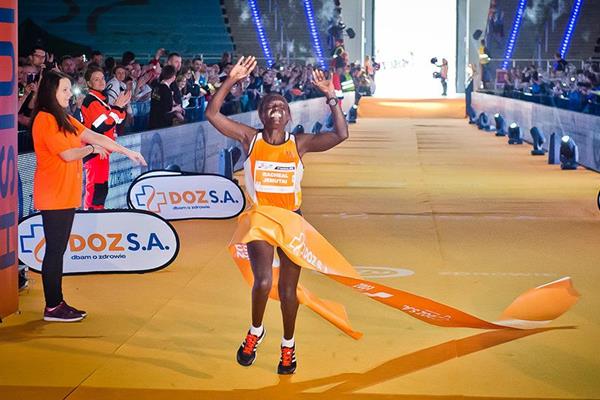 Japan’s Taiga Ito came from behind in the final five kilometres of the Nagano Marathon on Sunday to win the race in 2:14:39 as Kenya’s Rachel Jemutai Mutgaa made an early break before going on to win the women’s race in 2:33:00.

After covering the opening five kilometres in a modest 16:13, Tatsunori Hamasaki and Jun-ichi Shioya broke away from the lead pack in the men’s race. By 10km they led the chase pack which included Ito, Kenya’s Henry Sugut, Mongolia’s Ser-Od Bat-Ochir and Uganda’s Moses Kibet by 14 seconds.

Shioya and Hamasaki increased their lead to 21 seconds by 15km, and then further extended it to 31 seconds by 20km.

However, starting at 20km, Bat-Ochir broke away from the pack and started to chase the two leaders Hamasaki and Shioya. Shioya soon began to falter and he was passed by the chase pack before 25km.

Bat-Ochir also caught Hamasaki to move into the lead, while the chase pack, including winner Ito, was about 15 seconds behind.

Bat-Ochir’s lead had grown to more than 30 seconds at 30km, but Ito began to make up ground. Just five kilometres later, he trailed the Mongolian by just 15 seconds, and he eventually caught him at 37km.

Unlike the men’s race, the women’s race was quite one-sided with the decisive move being made early on.

Soon after the start, Rachel Jemutai Mutgaa broke away from the chase pack with Miriam Wangari and Famtu Eticha in tow. By five kilometres the trio was more than 50 seconds ahead of Mayumi Uchiyama who in turn was 26 seconds ahead of Aki Otagiri.

Mutgaa then broke away from both Eticha and Wangari, and by 10km Mutgaa was nearly 20 seconds ahead of her two African rivals. Mutgaa then continued to extend her lead all the way to the finish line, winning in 2:33:00.

Famtu Eticha finished second but she was more than four minutes behind the winner Mutgaa. Wangari finished third, more than a minute behind Eticha, while the first Japanese was Aki Otagiri in fourth.