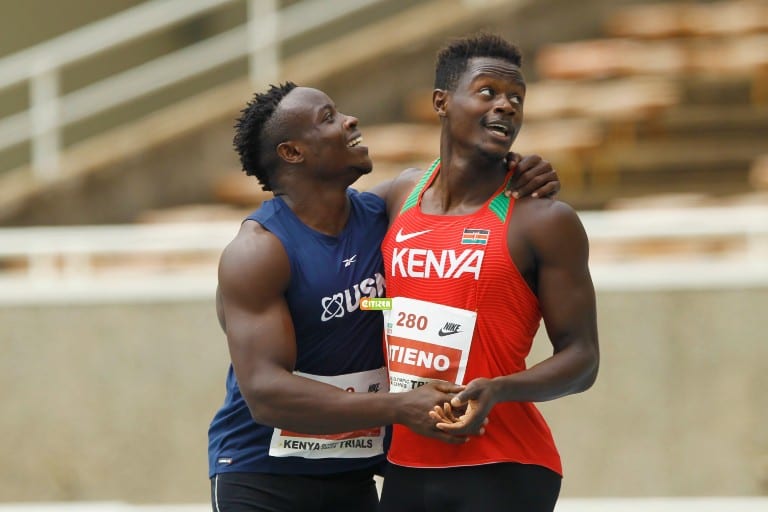 The fastest men in the country gave a fitting end to the opening day of the three-day National Trials as top stars collided in Kasarani to vie for Tokyo 2020 Olympic spots.

Ferdinand Omanyala ran a scorching 10.02 for victory in the men’s 100m final ahead of Mark Otieno who ran 10.05 as the duo secured Olympic tickets during Thursday’s event at the Kasarani Stadium.

Their performances obliterated Otieno’s national 100m record of 10.14 set in 2017 and meant Kenya will take two sprinters in the men’s 100m to a global championship for the first time in history.

There were three foul starts but the red flag spared the fastest men in the country as the pair went on to serve the best piece of athletics to a sizeable crowd on opening day of the three-day trials that were delayed by a year by the coronavirus pandemic.

For Omanyala, who had run 10.12 to win his heat, the record-breaking run brought with it a sense of relief and personal triumph after a troubling period in which Athletics Kenya (AK) threatened to leave him out of the Kenya’s Olympics team.

The 25-year-old had already achieved the qualifying time when he ran 10.01 in Nigeria but AK said it would not recognize the race due to its regulation bars anyone with a past doping violation from representing the country.

He served a 14-month ban in 2017 after a doping offence but received invitation to race at the trials by the AK and the country’s Olympics committee.

“It’s been a great journey and I’m so happy to get here. My prayer was that I qualify at home so that everyone could see. My point this year was to train and run; I do not want to involve myself in fights,” Omanyala said.

Athletics was never Omanyala’s first love –he was more enamoured by rugby before making the switch in 2016 and the 25-year-old believes he can thrive in a nation little known for its sprint talent.

“I’ve always wanted to change the notion that Kenyans can’t sprint. Everywhere you go the talk about Kenya is the middle and long distance but now that’s changed. Now there will be two sprinters lining up in the heats at the Olympics,” Omanyala said.

Fellow sprinter Otieno said the presence of Omanyala had brought the best out of him, after he had run an underwhelming 10.29 in the heats and also failing to attain the qualifying mark of 10.05 in races in Switzerland, South Africa and Zambia.

“I needed him to be honest for the pressure because that’s some of us can qualify. I’m so happy he brought his best in order for one of us to qualify but it’s sweeter that we’ve both done it. It means a lot and it’s a dream come true,” Otieno said.

The 28-year-old, who competed at the 2017 World Championships, added it was possible for a Kenyan to break the 10-second barrier.

“Both of us are running fast times because he (Omanyala) is now running 10.02 so we’re getting there. We’re known for long distance running but this is sprints coming up. Let’s see what will happen at the Tokyo Olympics,” he said.

Guest athlete Jacent Nyamahunge of Uganda won the corresponding women’s race in 11.76 seconds and Doreen Waka was second in 12.02 seconds to lead the Kenyan contingent but none attained the qualifying mark of 11.15 seconds.

In the women’s 5000m, Lilian Kasait ended Hellen Obiri’s two-year winning streak, sprinting to clinch the title in 14.52.18 in the day’s opening event.

Kasait held off the Olympic silver medallist’s charge on the final lap to take victory in a fast race that saw eight athletes attain the Olympic qualifying time at the Kasarani stadium in Nairobi.

Olympic champion Faith Kipyegon cruised to victory in the women’s 1500m ahead of Winny Chebet with the duo securing tickets for the rescheduled Games. Kipyegon’s winning time of 4:02:10 was well outside her personal best 3:53:63 that she ran in Florence, Italy, a week ago.

She will be looking to renew her rivalry with reigning world 1500m and 10,000m champion Sifan Hassan of the Netherlands.