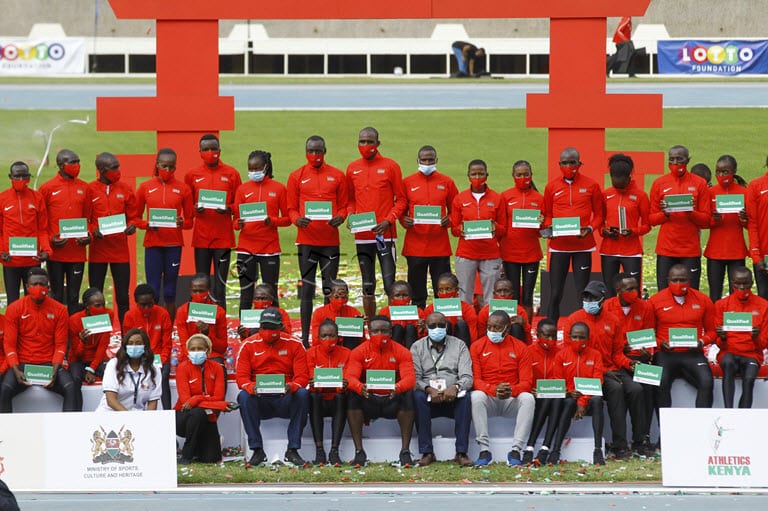 A total 41 athletes – 23 men and 18 women – have been named in a powerful Kenyan team bound for next month’s Tokyo Olympic Games following three-day National Trials at the Kasarani Stadium.

In a departure from the past, Athletics Kenya (AK) selectors picked the top three finishers in each event, provided they met the Olympic standard although new names can be introduced and others dropped depending on a set of conditions.

The team includes six marathoners – Eliud Kipchoge who won gold at Rio 2016, Amos Kipruto, Lawrence Cherono, Brigid Kosgei, Ruth Chpengetich and Peres Jepchirchir who had already been named prior to the trials.

The entire delegation of athletes including those in team sports are 86. They will have task of trying to better the achievement of the class of 2016 that produced Kenya’s most successful outing at the Olympics after collecting 13 medals (6 golds, 6 silver, and 1 bronze).

The coronavirus pandemic has created unprecedented challenges for this current group in delaying the Olympics, disrupting their workout routines and forcing them to train in isolation as well as locking them out of international events.

The final day of what have been spectacular trials saw the Olympic ambitions of Conseslus Kipruto bite the dust after he dropped out of the men’s 3000m steeplechase final. He won steeplechase gold at Rio 2016 and is the reigning world champion.

Faith Kipyegon (1500m) and world marathon record holder Eliud Kipchoge are the only athletes that will head to the Summer Games as champions while Hyin Kiyeng (3000m steeplechase), Julius Yego (Javelin) and Hellen Obiri (5000m) will attempt to go a step better having won silver in the previous edition.

The team will re-assemble in Kasarani next week for the start of their pre-Olympic training camp with Shujaa, Malkia Strikers and the Kenya Lionesses expected on Monday. Other athletes will join on Wednesday.

A selection of the Kenyan team – including Shujaa, Malkia Strikers, Kenya Lionesses, athletes in sprint events (including relays) and Yego are expected to depart the country later next month for Japan’s Kurume City to continue their pre-Olympic training.