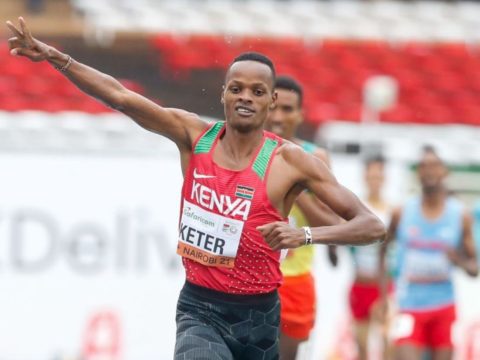 Newly crowned world under-20 1500m champion Vincent Keter is ready to face off with bigwigs at the Kip Keino Classic, the final leg of the 2021 Continental Tour Gold series set for Saturday at the Moi International Sports Centre, Kasarani.

Keter will be returning to the Kasarani Stadium where he won gold at World Under-20 Championships last month as he now scales the heights to the senior category.

“Winning the world under-20 title was a turning point for me since it really motivated me to go for more. After the World Junior event I did not rest in order to prepare for the Kip Keino Classic which I think I am ready for,” said Keter.

While the world 1500m champion Timothy Cheruiyot will not be defending his title on Saturday, Keter said he is ready to fill in the shoes of his mentor and training mate at Rongai Athletics Camp.

The 19-year-old will battle it out with among others Olympians Abel Kipsang and Charles Simotwo, Boaz Kiprugut and world junior record holder Ronald Kwemoi.

Also in the mix are the Djibouti pair of Hiss Bachir and Harid Binyamin.

“I know it will be very competitive facing the likes of Kipsang and Simotwo but I will do my best especially for my training mates in Rongai,” said Keter.