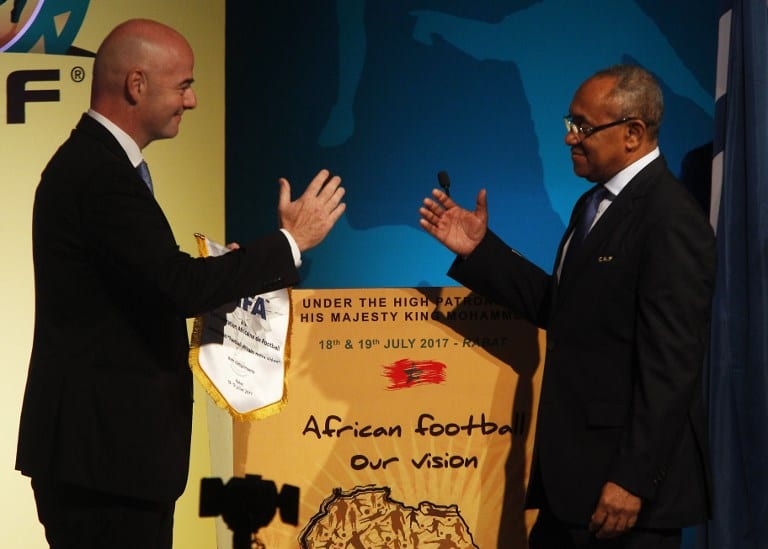 An Executive Committee reviewed the resolutions of the various working groups of the first CAF symposium held between July 18-19 at the Palais des Congrès in Skhirat, near Rabat in Morocco.

The CAF exco advocated the establishment of a working group to work on the implementation of the resolutions and propose short, medium and long term execution timetables.

However, a consensus emerged on a number of issues raised by the working groups;

Working group one focused on African Cup of Nations (AFCON) competition and specifications where an expanded tournament was passed. The tournament will now be held in the months of June and July, a departure from the traditional January/February.

The competition will however remain a biennial event (every two years), odd years and exclusively held on African soil with African national teams.

Working group two was on Inter-club competitions and the Exco agreed to maintain the current format, but to proceed in the future to a change in timings for competitions which are expected to start from August to May.

Interclub Competitions; the Committee noted the lifting of Sudan’s suspension by FIFA and indicated that the Sudanese clubs engaged in the Total CAF Champions League and Total CAF Confederation Cup are not disqualified, but in accordance with the regulations, are declared losers of the Day Six matches of the group stage.

As a result, Sudanese club, Hilal El Obeid is qualified for the quarterfinals of the Total CAF Confederation Cup.
The Exco also reviewed resolutions by Working Group three, which was on football development (Coaching, Refereeing and Medical).

The principle of increasing the indemnities of referees was approved; the Committee expressed its determination to explore all scientific and medical solutions that could eradicate the phenomenon of age cheating, likewise a research that can help to determine the causes of sudden death among footballers, of which majority of the victims are of African origin.

From resolutions of Working group four on youth football, the Committee decided to organize zonal qualifiers for the Africa Cup of Nations for the youth categories (U-17, U-20, U-23), with the flexibility offered to each zone to propose a formula.

The committee also resolved to strengthen medical checks in determining the eligibility of players for the age group championships.

Working group five was dealing with International Partnerships; the Committee recognized the urgent need for improved relations between CAF, its member associations, Governments and the African Union. Measures to enhance the relations will continue to be chatted by the implementation committee.

On Communication and Media; the Executive Committee was clearly in support of suggestions made by members of Working Group seven for the improvement of CAF’s communication tools on the digital platforms and social media, in particular the creation of a website in line with the standards of CAF.

The Committee committed itself, with a view to strengthening the specifications of the competitions, taking into account the expectations of the media. Such are aimed at improving relaying of information including fine data of the African competitions under the umbrella of CAF.

Football players, Roles and Perspectives as discussed by Working group eight endorsed by the Exco, cognizant of the principle of creating a framework for cooperation with legendary African footballers and their greater involvement in CAF activities.

Total AFCON Cameroon 2019
Inspection will be conducted in early September, while the Total U-23 AFCON was announced open for bidding after
Zambia formally withdrew from the hosting of the 2019 edition.

On Beach-Soccer AFCON, the Committee decided to grant the 2018 edition to Egypt, the only country which expressed interest in the organization at the end of the deadline for the call for applications.