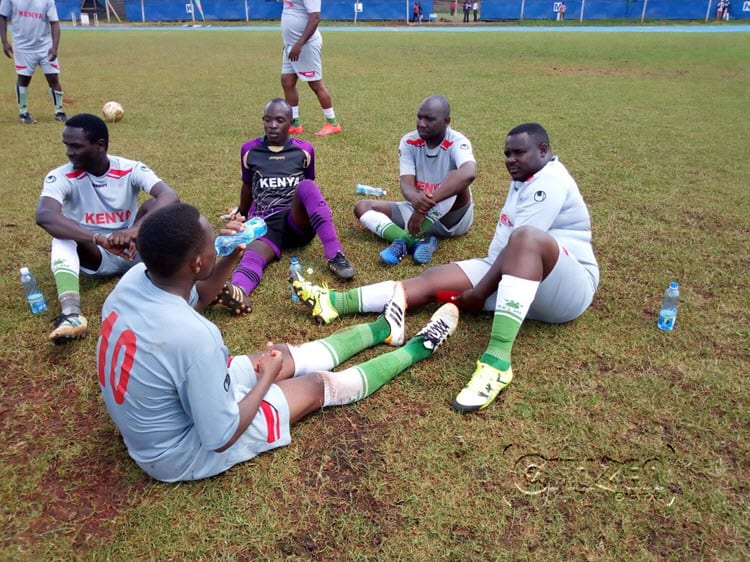 The knockout match between Nairobi Members of County Assembly and the Senate failed to produce a winner as the former launched fierce protests at the referee following a last minute equalizer at the Kenyatta Stadium in Machakos.

The centre referee of the Kenya Inter-counties Sports and Cultural Association (KICOSCA) match was forced to flee to safety as Nairobi MCAs lashed out at him in protest of Kipchumba Murkomen’s leveller.

The Elgeyo-Marakwet senator tucked home the equalizing goal in stoppage time to leave the round of 16 tie locked in a 1-1 stalemate and sparking fury from the MCAs who claimed the referee had allowed extra minutes to favour the Senate.

At the time of press, Citizen Digital had yet to locate the referee for comment on whether the clash would go the full length of extra time or straight to penalties.

The tie had been even at the break following a four first half before Mark Macharia blasted Nairobi into the lead just minutes into the second half.

Senate spurned a glorious chance for the equalizer moments later when their goolkeeper Felix Okwiri failed to convert a 56th minute penalty as his Nairobi opposite produced a stirring save to keep his effort out.

The Senate’s unrelenting pressing play paid off late on as Murkomen ghosted behind the Nairobi defence to meet his Mombasa counterpart Mohammed Faking’s cross and tucked it away for the equalizer.

As the melee cooled off, Senate hero Murkomen said they would await a report from the County Assembly Sports Association on the matter but exuded confidence his side will go all the way to the finals should it be ruled in their favour.

“Members of Nairobi County assembly should not have behaved that because these games purposely are for unity and they should know Nairobi should lead in terms of discipline,” Murkomen said.

The Senate Majority Leader shared a light moment as he delved into his anti-Arsenal banter on social media that has seen him tear into supporters of the English Premier League club.

“I’m a Manchester United fan so you understand the rivalry between the two teams is very big. I’m just against Arsenal because of the rivalry and I can tell you for free that we will have another president in Kenya before Arsenal wins the English Premier League title,” he teased.

“My tweets are just for fun because for example the Deputy President William Ruto and NASA principal Raila Odinga support Arsenal so I always make fun because they not in a winning team like Manchester United.”

The week-long KICOSCA tournament concludes on Saturday with the winning team set to represent Kenya at the East African Legislative Assembly (EALA) Games in Kampala, Uganda.

KICOSCA ROUND OF 16 RESULTS