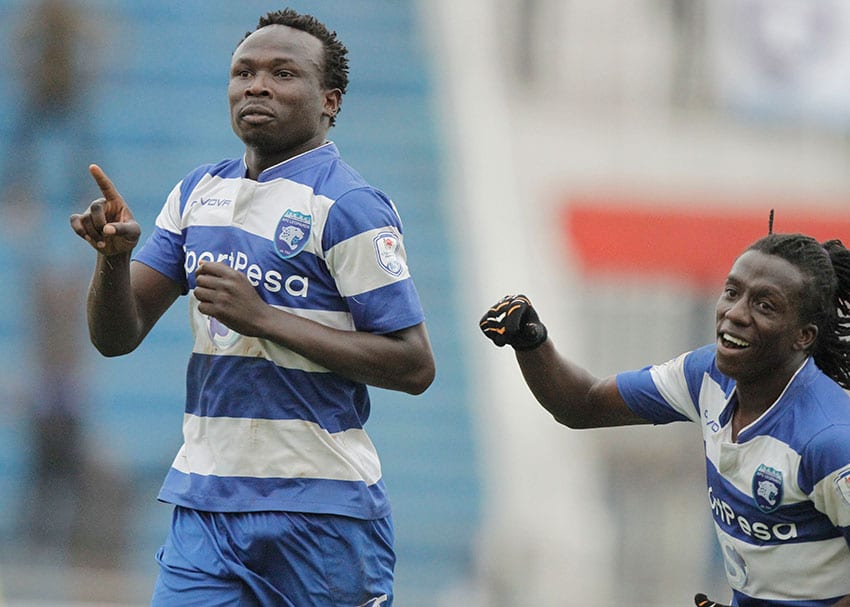 AFC Leopards rallied from a goal down to hold Mathare United to a one all draw in a top draw Kenyan Premier League (KPL) round 18 clash played at the Nairobi’s Nyayo Stadium on Saturday.

Mathare’s defender David Mwangi opened the scoring in the 21st minute and the 12-time champions had to wait until the 55th to restore parity through Kepha Aswani, who grabbed his seventh of the season.

Elsewhere, Thika United failed to fully bounce back from the 4-0 mauling by Leopards last week after they were forced into a barren draw by visiting Western Stima in a result that did neither side any good.

The powermen are perched at sixth with 26 points while Thika remain just a place the drop zone ten points adrift.

Mathare’s coach Francis Kimanzi was incensed after the game as he blamed officials for leaving the pitch with a share of the spoils.

“There is a big question mark about officiating because surely its painful when you lose points this way. This was our game but you saw they denied a penalty and allowed a clear offside goal.

“We however, played well and our plan worked because we scored an early goal which saved the day,” the former Harambee Stars and Tusker FC coach complained.

Wycliffe Kasaya, the Slum Boys custodian who previously played for Leopards before joining second division side, Nakumatt FC drew positives from the result.

“If you look at AFC Leopards, their standard has improved. It was not an easy challenge so the point we got is better than nothing. I had no pressure coming to face my former club for the first time in the Premier League, but I knew I needed to be at my best,” he added.

Aswani who limped off late in the second half rued their profligacy in front of goal saying it cost Ingwe maximum points as the team inched up to tenth on 21.

“I know the expectations were high especially after the 4-0 win over Thika last week, we have let our fans down but we promise them we are winning the next match.

“The problem was that we could not score as many goals as the chances we created. We never won one point; we lost two despite Mathare’s position in the league.

“There should be no worry for my injury, tomorrow (Sunday) I will be seeing our doctors and I’m sure I will be fit to feature in the next match. It is not that serious,” the former Bandari FC and Thika United player stated.

“We had got the punch and we were pressing Mathare at the time but we had to withdraw two key strikers who would have killed off the game had they remained. Our opponents played well too and I rate it a good match,” the former Harambee Stars captain remarked.

Mathare broke the deadlock in the 21st minute when Jackson Saleh who is on loan at Ingwe from Gor, fouled Daniel Mwaura on the right outside the box.

The resultant free-kick was whipped into the box by Robinson Kamura and Mwangi turned in a smart header past Ian Otieno.

Ivan Minnaert’s Leopards stalked their opponents from the start of the second half and in the 55th, Aswani restored parity with a diving header with John Ndirangu’s cross providing the assist.