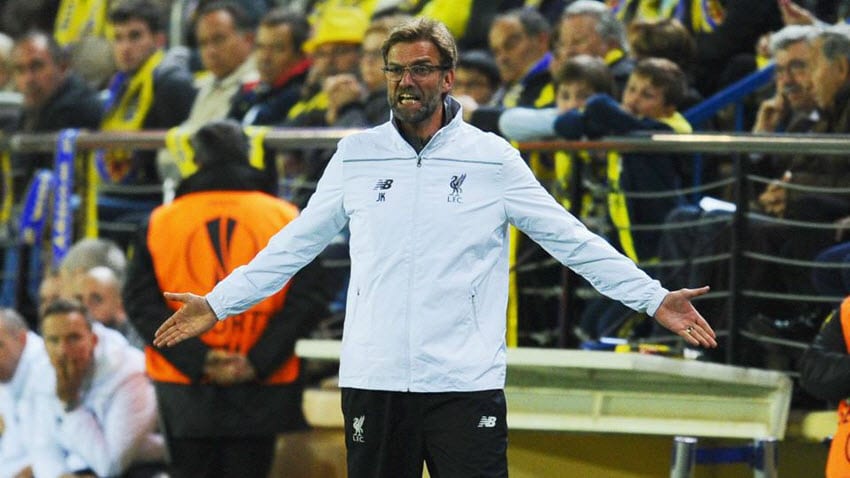 Jurgen Klopp felt Liverpool conceding a stoppage-time goal on the counter-attack against Villarreal made “not too much sense”.

The first leg of the Europa League semi-final at El Madrigal appeared to be petering out to a forgettable stalemate before a flurry of goalmouth action at both ends culminated in substitute Adrian poaching the only goal of the game for the hosts.

Liverpool left-back Alberto Moreno, who a few moments early blazed over on a break of his own, was out of position as Bruno’s chipped pass caught out Kolo Toure for Villarreal playmaker Denis Suarez to expertly pick out the goalscorer.

Klopp could still find plenty of other positives and is confident next week’s return at Anfield will be an entirely different proposition, while he was frustrated to see Adam Lallana flagged offside after the England midfielder was pulled back by Eric Bailly when through on goal.

“I’m of course not too happy with the goal we conceded in the last second or something,” Klopp told BT Sport.

“A counter-attack in the 92nd minute makes not too much sense to be honest.

“It’s only the first leg. We can speak about how it was clearly not offside for Adam Lallana, then it would have been no offside and a red for Bailly.

“We did not have luck, but it is only the first half, 1-0. They have to come to Anfield now and they know how strong we are.

“To be honest, I would have thought we would have had more problems here

“We defended really good and now we know more. We had our moments, we played football.

“They could not defend us. This race is not over.”

For all those plus points, Klopp still found himself grasping for reasons as to why his side’s defensive discipline deserted them in untimely fashion.

“I have no explanation for this,” he added. “It’s no problem if we have enough players in and around the box and we have the usual protection but in this situation we did not have enough protection.

They played a chipped ball in behind Kolo; Alberto, I don’t know where he was at this moment. That confusion, it makes really no sense. We know this.

“That was the only big mistake we made in the game. Okay, they scored with it. That’s how it is, you have to accept this. It’s no problem.”