KPL Watch: Sony hoping to rebuild before it’s too late

It was all smiles at Sony Sugar by the time the 2018/19 Kenyan Premier League (KPL) season was ending, the side finishing fifth in the 18-team league.

That was a no mean feat with only Gor Mahia, Bandari FC and Sofapaka accumulating more points  than the millers, as Tusker FC who finished fourth only had a better goal difference of 56 points, same as Sony who had endured financial constraints the all through.

But chicken would come home to roost in the preseason, as the sponsor had failed to honour the players’ sacrifices in the season and was showing no sign of doing that. The simple answer was there was no money.

The ugly face of biggest enemy of the beautiful game in Kenya, lack of funds, had manifested to overshadow anything of the past.

Embroiled in corruption scandals that have recently seen union  members of the sugar firm report unpaid arrears amounting to Sh. 548 million, Sony could not shoulder the burden of the team as it were.

At the end of the sorry tale, the entire squad of last season ditched Sony, save for three players. With the players in the local market aware what was happening, Sony could not attract notable players from rival KPL teams forcing them to rebuild from the scratch.

Only a few experienced players who were desperate to find new clubs were willing to join Sony, such as former AFC Leopards attacker Aziz Okaka, former Gor Mahia goalkeeper Shaban Odhoji, Timothy Luda and Collins Okumu among others.

The situation at Sony has not been promising, with only two weeks of assembling the team together leaving head  coach James Nandwa with more questions than answers ahead of the season opener this weekend, against a conspicuously reinforced KCB.

“It has not been easy at all. I have only been with the players for two weeks, some joining  even later. I have a few who have played in the Premier League before, like Okaka, Meshack Karani and Humphrey Okoti while others are very new to this level.

“My challenge is that I came and almost the entire team left, but I promise to do the best I can with new team,” told Nandwa, a former Harambee Stars coach who took over this month.

He finds it important to call for patience among the club fans, saying his record with previous teams should not be put on the see-saw immediately as the season kicks off, before he puts  the house order.

“The difference here is that I’m building a new team, and there is much I will have to assess in the competition proper. Elsewhere I have not gone through this, but with time we can catch up. My humble request to the fans is to support the team as it is.

“Let them come and support the players I select no matter how we are, that the first step of rebuilding because the season is here and we have to play,” pleaded Nandwa, who has also coached AFC Leopards, Tusker FC and Thika United.

A top-10 finish after the first half of the season is Nandwa’s target, noting such an achievement will leave his men in a prime position to cope with second leg pressure.

While one of the surviving members of the last season’s team and captain speaks “uncertainty in the future,” it leaves a lot to be desired. Karani is optimistic but candidly wants the money crisis to be dealt with of the Sony has to rise again.

“Last season the only challenge we had was lack of money. In fact, had all been well in terms of finances, we would have finished in better position. We have been told there are sponsors coming on board and I hope everything will be okay, but for now I can’t speak much because our fate will depend on how fast or slow the gelling process of the new team will be,” explained Karani.

The sponsorship casts a ray of hope to Karani and his comrades is the one-year deal signed between the club and a Chinese information technology firm, Quantdragon Limited.

Karani’s sentiments were similar to newly recruited Okaka, who promised nothing much especially in the opening match.

“I have not seen this team in a match situation, I’ve only trained with them for four days. We have not held a meeting with the board of directors to hear what they are targeting this season, but I hope after some matches together we will be different,” offered Okaka.

One to Watch: Aziz Okaka 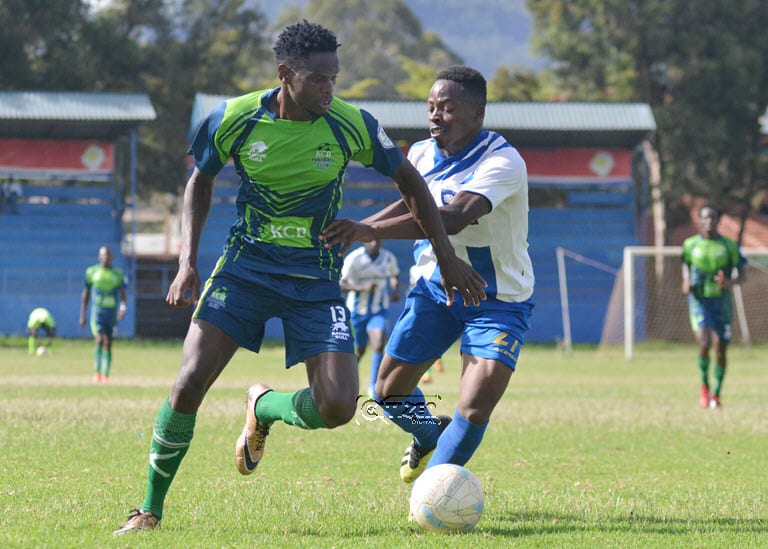 Okaka could be the man to watch in the new Sony team, having returned to his former home after leaving a competitive Leopards squad.

His coach Nandwa expects much from him alongside the few faces who have played in the KPL previously, as he throws the rest of the rookies into the deep waters.

“I’m sure they will give us a lot of value especially when it comes to helping their young teammates to cope with the topflight pressure. This will be key especially in the early stages of the season,” underscored Nandwa.

At 37, the attacker has invaluable wealth of experience, handy for the newlook  Sony.