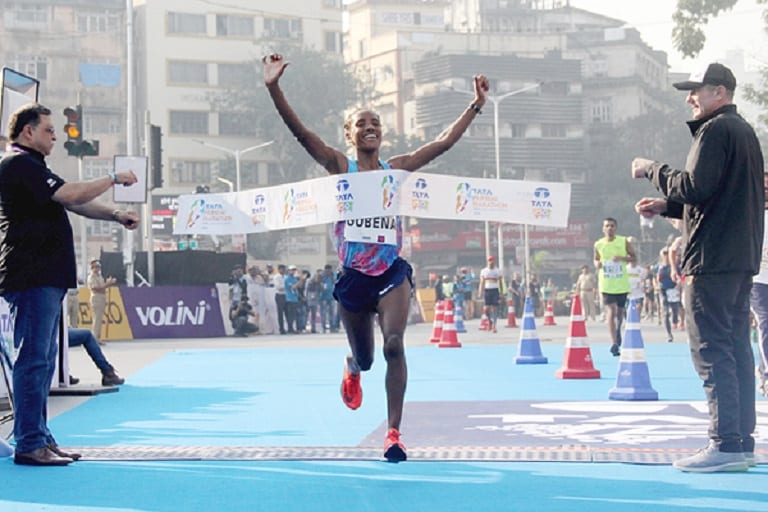 Abera Kuma and Amane Gobena of Ethiopia will lead the fields for the Tata Mumbai Marathon 2019 on Sunday 20 January.

Kuma, 28, ran his personal best of 2:05:50 when finishing second in last year’s Rotterdam Marathon and in that sort of form could certainly challenge the TMM course record of 2:08:35 set by Kenya’s Gideon Kipketer in 2016.

Kuma will be racing in India for the first time but will have got some useful advice about what to expect from his younger sister Dibaba Kuma, who was an impressive winner at the Tata Steel Kolkata 25K last month.

Another runner to highlight in this year’s men’s elite field is another Ethiopian Aychew Bantie. He finished fifth in Mumbai last year, at the time only his second marathon, but then reduced his best to 2:08:15 when finishing second at the Kosice Marathon in October.

Nine men in this year’s race have personal bests faster than the course record and will be motivated by the fact that a US$45,000 first prize cheque, for both men and women, is on offer in India’s richest road race.

Gobena is not only the defending champion in Mumbai but will also be the fastest woman on the start line opposite the famous Chhatrapati Shivaji Maharaj Terminus.

Now 36, the Ethiopian is still a force to be reckoned with. She ran her personal best of 2:21:51 when finishing second in the 2016 Tokyo Marathon and in addition to her Mumbai win last year, she also finished third in the renowned Prague Marathon last year.

The formidable women’s course record of 2:24:33 has stood to Kenya’s Valentine Kipketer in 2013 but Gobena showed that it could be challenged in 2018 when she ran the second fastest winning time ever, crossing the line in 2:25:49.

In what is anticipated to be an enthralling and entertaining contest in front of tens of thousands of spectators lining the course in India’s entertainment and financial hub, two previous Mumbai women’s winners have returned to try to regain their crowns.

The Ethiopian pair of 2016 champion Shuko Genemo – who finished third in 2018 but later in the year ran a season’s best of 2:26:10 when finishing fifth in a very high-quality Ljubljana Marathon – and her two-time predecessor in 2014 and 2015, Dinknesh Mekash will be part of a large contingent of Ethiopian runners in the women’s race, six of whom have run under 2:27:00.

Among that group is the 23-year-old Birke Debele who finished fourth in Mumbai last year but improved her personal best to 2:25:28 when finishing second in the Hamburg Marathon last April.