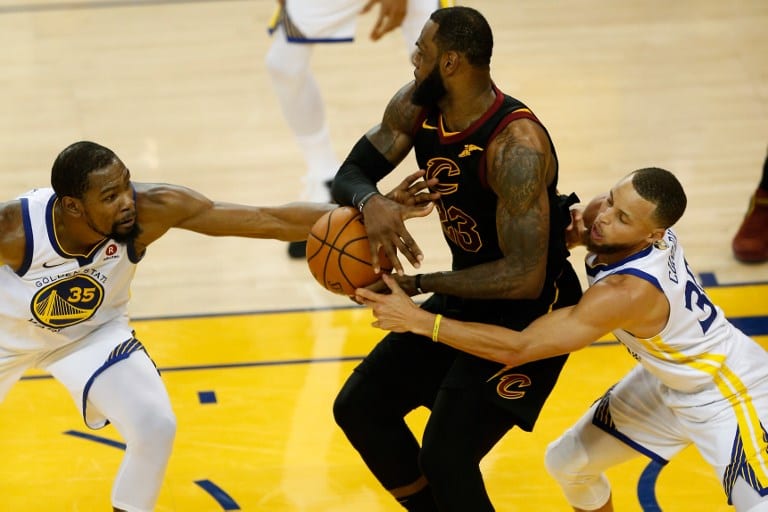 Cleveland’s LeBron James, known for bouncing back stronger from playoff losses, promises such heroics Sunday in the NBA Finals after what he calls one of the toughest defeats of his career.

Defending champion Golden State opened the best-of-seven championship series with a 124-114 over-time home victory Thursday after the Cavaliers led in the final seconds.

Referees reversed a charging foul on Warriors forward Kevin Durant on video review into a blocking foul on James in the final minute of regulation time and Cleveland’s J.R. Smith squandered a last shot chance in the fourth quarter apparently unaware the score was level.

“It’s one of the toughest losses I’ve had in my career,” James said Saturday. “Because of everything that kind of went on with the game and the way we played.

“It was a tough 24 hours… for our whole ballclub because we put ourselves in a great position to be successful.”

James scored 51 points, grabbed eight rebounds and passed off eight assists, his scoring total the most in an NBA Finals game since 1993 and the most ever in a losing cause.

But far from demoralized, James said he is re-energized by the chance to level the series before the scene changes to Cleveland next week in the fourth consecutive finals between the two clubs.

Improvements after defeats have become a James trademark in the playoffs. Four times after producing fewer than 27 points in a post-season loss this year, James has scored 42 or more in the following contest.

But where do you go from 51 points?

“That means he has to score 60 now, right?” Cavs coach Tyronn Lue said of James. “Well, got to score 60 tomorrow then I guess.

“After a loss, it’s tough. But I think he always comes out and leads by example and sets the tone early. I think, offensively, we need him to do that, especially on this floor with their crowd and the way they play. We need him to set the tone early in all the games.”

Stephen Curry, who led the Warriors with 29 points in the opener, says his team will be more aggressive in keeping James from comfortable situations.

“We’ve got to be a little bit more aggressive,” Curry said. “It just means doing things a little bit faster, a little bit more physical, and trying to make not just him but everybody else more uncomfortable out there to start the game. I think we can do that.”

Draymond Green poked James in the right eye during a drive to the basket that the Cavs playmaker says looks worse than it hurts.

“There is going to be a little animosity and a little edginess,” Curry said. “We’re enjoying the competitive environment.”

A victory Sunday would put the Warriors halfway to their third crown in four seasons, the other denied when Cleveland rallied from 3-1 down in the greatest comeback in NBA Finals history.

“They might have been deflated, and they came back and won. So we’re expecting another great effort from them,” Warriors coach Steve Kerr said.

“We’ve been through this too many times. All we’ve done is win one, and we’re on to the next one.

“We’re right where we want to be and we’re all very confident that we’re going to get better from here.”

“I didn’t think we made him work hard enough. I thought everything was smooth sailing for him,” Kerr said. “We’ve got to put more pressure on him. We can’t just sit back and let him pick us apart.”