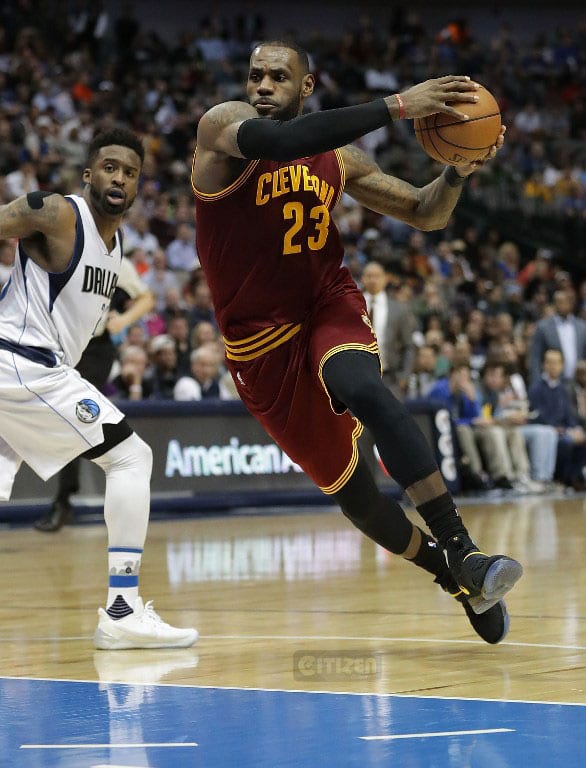 A game featuring playoff-level intensity from tip-off to last shot saw the defending champions rally in overtime after James had fouled out while the Wizards, who saw their 17-game home win streak snapped, served notice they will be a formidable foe when the playoffs arrive.

“Thirty-nine and 12? We’re going to trade him tonight,” Cavaliers coach Tyronn Lue told reporters with a grin after the game before adding, “He’s not going anywhere.”

With the Wizards leading 118-117 and 12 seconds remaining, James drove the length of the court but missed a layup, setting up two John Wall free throws for a 3-point Washington lead with 3.4 seconds remaining.

“It was a point-blank layup and I missed it,” James said. “I was blessed to (get) in position where I could make up for it.”

Love hurled a long pass to James along the right sideline and the four-time NBA Most Valuable Player banked in a shock fadeaway 3-pointer over Washington’s Bradley Beal to deadlock the game at 120-120.

“LeBron made a heck of a shot that he would probably make one out of a million times,” Wall said.

James, who also made three consecutive 3-pointers for Cleveland late in regulation, fouled out seconds into overtime trying to defend a shot by Beal, who scored a game-high 41 points, the last of them on a 3-pointer that put Washington ahead 133-131.

Irving answered with a baseline jumper and a 3-pointer to put the Cavaliers ahead to stay. Marcin Gortat pulled the Wizards within 136-135 but Irving and Love each hit two late free throws to seal the victory, snapping a seven-game Wizards win streak, their longest in 12 years.

“(We won) by executing at a high level,” Irving said. “I’m glad we pulled it out — great win. Motivating.”

James scored 32 points and passed out a career-best 17 assists, Irving scored 11 of his 23 points in overtime and Tristan Thompson added 22 points and 12 rebounds for the Cavaliers.

“I think they respect us. That’s the most important thing,” Wall added. “Throughout the game LeBron said, ‘You all are playing some hell of a basketball right now.'”

There was bad news in the triumph for Cleveland. Starting guard Iman Shumpert, filling in for injured J.R. Smith, suffered a left ankle sprain and missed most of the contest.

The Cavaliers improved to 35-15, best in the Eastern Conference, while Washington fell to fourth in the East at 30-21 — positions that would set up a possible second-round playoff meeting between them.

“We’re definitely going to see them down the line,” Beal said.

DeMar DeRozan returned after missing seven games with a sprained ankle and scored 31 points to lead Toronto over the visiting Los Angeles Clippers 118-109.

The San Antonio Spurs missed 23 of their first 25 shots in the fourth quarter in an 89-74 loss at Memphis, setting season lows for points and assists with 11.

Will Barton scored a season-high 31 points and grabbed eight rebounds to lift host Denver over Dallas 110-87.

Utah’s Gordon Hayward scored 30 points and the Jazz won 120-95 at Atlanta while the Los Angeles Lakers snapped a 12-game road losing streak with a 121-107 victory at New York.