Leopards coach Aussems to jet back to the country next week 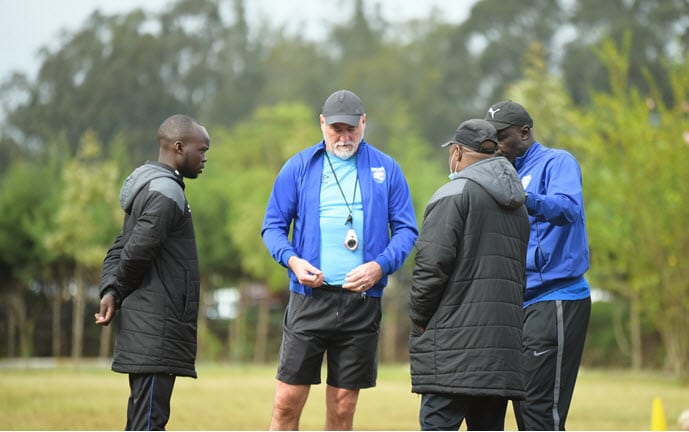 AFC Leopards head coach Patrick Aussems will jet back to the country next week on Thursday or Friday, club chairman Dan Shikanda has said.

Shikanda has confirmed that they have already worked on how the Belgian will return to help continue the club’s charge for a first league title since 1998.

“I was waiting for his last jab, so we are expecting him to land in Nairobi– next week. Our target is to win the league this season although we have had a lot of set-backs including corona which has affected our finances,” Shikanda said adding, “I call upon well-wishers to come on board and boost us at this point in need”.

Shikanda has however cried foul over police who stopped them from training on Tuesday citing that the Ministry of Sports and their counterparts from Health docket have not yet released new sports resumption protocols.

“Preparations have been quite a challenge and really disturbing to us. Recently we were forced to halt our training by the police on reasons that we have to wait for the government through the ministry of health to release their new health protocols before we resume training.

That means that we should do nothing and hence this will mean trouble as far as honouring the Mathare United tie next week is concerned”.

Ingwe are scheduled to square it out with Mathare on Wednesday and a win will propel them to second on 32 points, four behind leaders Tusker FC.

Leopards are enjoying one of their best league starts in years and sit third on the standings with 29 points. They can dislodge KCB FC in second if they win their two games in hand and will remain only a point behind leaders Tusker FC who are on 36, with the top division expected to resume on May 12.