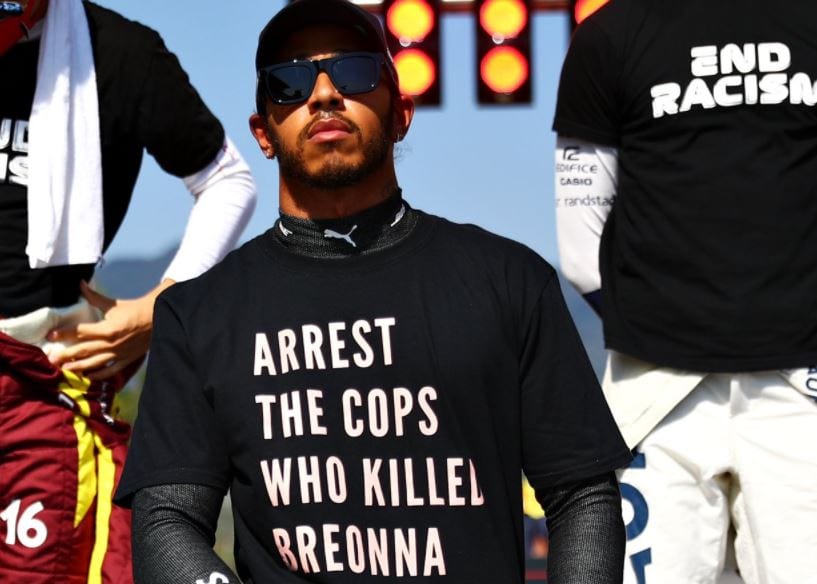 Formula 1 bosses are looking into whether Lewis Hamilton broke rules at the Tuscan Grand Prix by wearing a T-shirt highlighting police brutality.

A spokesman for the FIA said the matter was “under active consideration”.

He said the FIA was a non-political organisation and was considering if Hamilton’s T-shirt broke its statutes.

The T-shirt said: “Arrest the cops who killed Breonna Taylor” – a black woman shot eight times in her Louisville, Kentucky home by US police in March.

Hamilton’s shirt, which he wore during the pre-race anti-racism demonstration and on the podium, also said: “Say her name.”

It was not immediately clear which statute from governing body the FIA was at issue.

Asked whether the FIA considered the T-shirt to be bearing a political message, the spokesman said: “That’s the consideration we are looking into.”

Taylor was one of a number of victims of incidents involving police violence in the US whose names have become rallying cries for equality and justice.

Hamilton said after winning the race on Sunday: “I’ve been wanting to bring awareness to the fact there are people being killed on the street.

“And someone was killed in her own house and they were in the wrong house and those guys are still walking free.

F1 and the FIA have mounted an anti-racism and pro-diversity campaign this year, which includes anti-racism demonstrations before every race.

Hamilton has been at the centre of the demonstrations, as the sport’s most high-profile figure and its only black driver.

The spokesman said that the FIA had been working with Hamilton on its diversity programme this year.

Mercedes F1 boss Toto Wolff said on Saturday that Hamilton had the organisation’s full support in his desire to highlight racial injustice and that it was up to him what T-shirts he wished to wear to demonstrate that.

Wolff said: “No question – it is entirely his decision. Whatever he does, we will support.

“The team is fighting against any kind of racism and discrimination and it is Lewis’s personal fight for Black Lives Matter and with all the support we can give him. It’s his call.”

After the race, Mercedes responded to a Twitter user who asked that Hamilton “keep politics out of F1”, saying: “We’re not bringing politics into F1; these are human rights issues that we’re trying to highlight and raise awareness of.”

Wolff added: “Black Lives Matter is something that is important to all of us and we have supported Lewis all the way.

“The much broader movement is obviously the fight against any kind of racism and discrimination – and we as a team and as a corporate have always put an emphasis to fight against that injustice.”

The only reference to politics in the statutes is a requirement on the FIA to “refrain from manifesting discrimination on account of race, skin colour, gender, sexual orientation, ethnic or social origin, language, religion, philosophical or political opinion, family situation or disability in the course of its activities”.

The sporting code forbids competitors from “affixing to their automobiles advertising that is political or religious in nature or that is prejudicial to the interests of the FIA”.