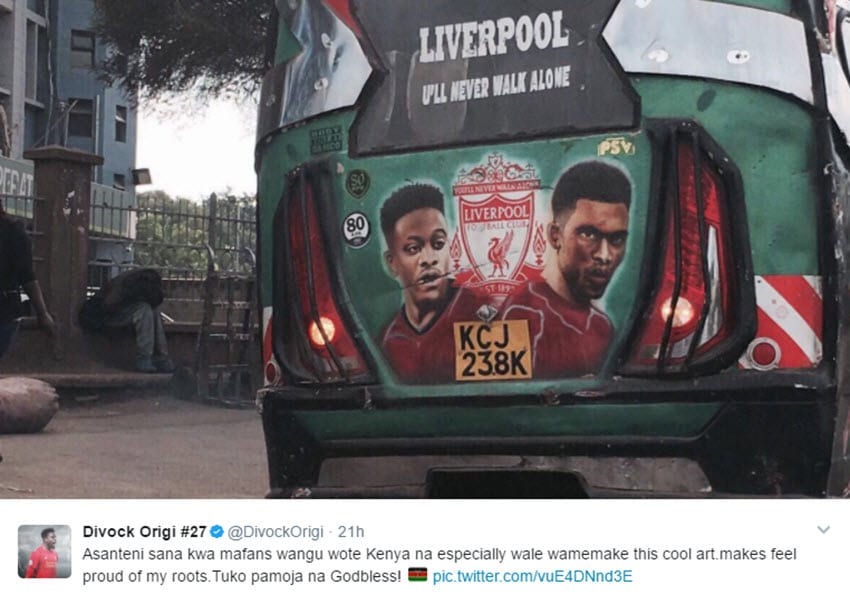 Liverpool striker Divock Origi who traces his roots back to Kenya has been striking a chord with locals over the past week.

After responding to questions in near-fluent Swahili during an interview by BBC Swahili in the UK last weekend, Origi shared an image of a graffiti depicting the star and teammate Daniel Sturridge in Liverpool colours on a matatu’s rear.

It sparked a revelation from his cousin Arnold, a Kenyan international, who stated the former Lille star loved matatus as a kid.

Origi’s love and mastery of languages is stunning; he is fluent in four languages. He learned Swahili and English in the family home, Flemish growing up in Ostend and French after signing for Lille aged 15.

The 22-year-old told British press the guardian he understands Dutch and reads three books a month.

Origi is the son of former Harambee Stars striker Mike Okoth who earned 120 caps with the national team and enjoyed a successful club career in Belgium.

A son of one of Kenya’s most successful professional footballers, Origi began his career at Lille, and scored on his professional debut for them in 2013. A year and a half later, he was signed for £10 million by Liverpool, who loaned him back to Lille for the 2014–15 Ligue 1 season.

Origi made his international debut for Belgium in 2014, and was part of their team which reached the quarter-finals of the 2014 World Cup, during which he became the youngest goalscorer in Belgian World Cup history.