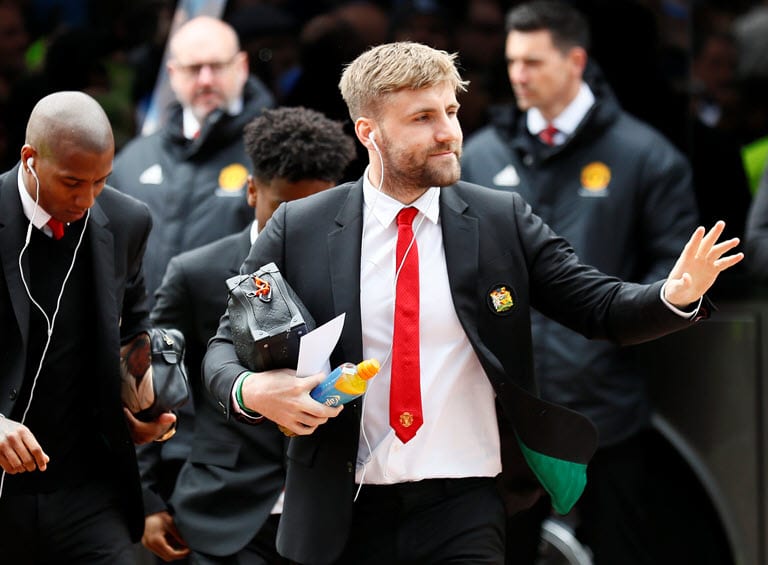 Luke Shaw has been named the Sir Matt Busby Player of the Year at Manchester United’s end-of-season awards.

The England international also picked up the United Players’ Player of the Year award.

Shaw has made 40 appearances in all competitions for United this season, ahead of Sunday’s final game against Cardiff City, and was named Player of the Month on three occasions – in August, September and March.

“It’s obviously nice for me,” Shaw told MUTV. “But I’d rather win no trophies and have a better season as a team. It’s nice but we need to move on and focus on next season and what’s to come.

“I think for me personally it’s probably been my best season since I’ve been here. I would have rather it had been a better season for the team but it wasn’t meant to be.

“Thank you to the fans for voting for this. And from me and the team we want to, not apologise, but we know it’s been a bad season.

“I look at the players in this team – we have amazing players, I know we will come back stronger. I’m very positive about next year, we all are as a team.”

Brazilian midfielder Andreas Pereira won the club’s Goal of the Season award for his strike in United’s 3-2 win over Southampton in March.

Midfielder Katie Zelem was named Manchester United Women’s Player of the Year after scoring 11 goals during a successful inaugural campaign for Casey Stoney’s side.

Tahith Chong edged out fellow nominees Angel Gomes and James Garner to win the Denzil Haroun Reserve Team Player of the Year award, which recognises the club’s best U23 player.

It caps a breakthrough campaign for the 19-year-old Dutchman, who has played in three different competitions since making his senior debut as a substitute in January’s FA Cup win over Reading.

The 17-year-old striker has been recognised after scoring a combined 30 goals for the U18s, U19s and U23s.

The awards come off the back of a difficult season for United, which saw Jose Mourinho sacked, and the team’s form dip alarmingly under his replacement Ole Gunnar Solskjaer, after a bright start.

Solskjaer admits the club need to recruit well this summer to close the gap on their rivals.

“It’s been a rollercoaster,” Solskjaer said. “We had a fantastic start, everyone just enjoyed [themselves]. When you win games, you’re confident, you smile, you start to enjoy yourself.

“Then we got a few injuries and it’s been ups and downs the last two months but that’s football, that’s human beings. It’s not like Football Manager. You’ve got to deal with different stuff outside football as well.

“There have been highs and lows but I’ve enjoyed it, it’s a great challenge. I’ve not gone to bed one night worrying about what’s going to happen because I love coming in, the boys are fantastic.

“It’s a great challenge but it’s a great responsibility as well, because this club is huge. The media and everyone’s criticising us as soon as they’ve got a chance. We’ve just got to stick together.

“We’ve been through difficult periods before but we’ve got to come through it as a team. But we’ve got to do it together. We’ve got to recruit smart, keep blooding the youngsters and we will be fine.”